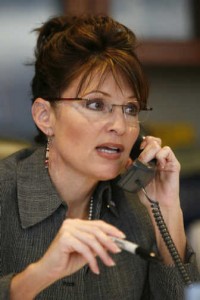 In an op-ed published for USA Today and copied on her Facebook profile (or should that priority be switched?), Sarah Palin continued taking steps towards being considered a credible candidate for President. First it was allowing herself to be questioned by the mainstream media and now it’s penning a serious policy critique of the Obama administration’s handling of Iran’s nuclear ambitions titled “It’s Time To Get Tough With Iran.”

Given that this assessment of international affairs comes just days removed from a “snack shot” at Michelle Obama, it may be hard for some to take anything Palin says seriously, however Palin does raise real issues. Palin establishes that if “Iran isn’t stopped from obtaining nuclear weapons, it could trigger a regional nuclear arms race in which [other Middle Eastern] countries would seek their own nuclear weapons to protect themselves.” She goes on to demand that President Obama “toughen up” specifically because he “once said a nuclear-armed Iran would be ‘unacceptable.'”

Mostly Palin reiterates familiar Republican talking points, but offers additional details and does get uncharacteristically specific with recommendations about what steps should be taken next with Iran:

Much more can be done, such as banning insurance for shipments to Iran, banning all military sales to Iran, ending all trade credits, banning all financial dealings with Iranian banks, limiting Iran’s access to international capital markets and banking services, closing air space and waters to Iran’s national air and shipping lines, and, especially, ending Iran’s ability to import refined petroleum. These would be truly “crippling” sanctions. They would work if implemented.

In the past, a persistent criticism of Palin was that she failed to study up on issues and was more comfortable offering catchy slogans instead of researched policy proposals. With this op-ed, she herself is “toughening up” and is starting to take on her critics.

For those who are “friends” with Palin on Facebook, you can check out the full op-ed there, or for everyone else, check USA Today.