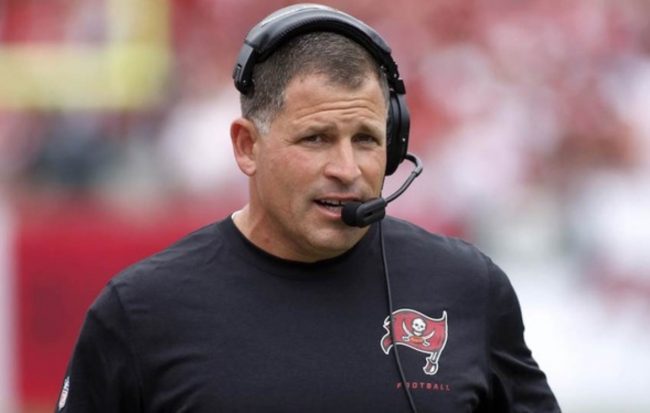 Update: Since the publishing of this article, the University of Tennessee pulled out of their agreement with Greg Schiano to take over their football program as head coach.

Word leaked today that the University of Tennessee was about to make Greg Schiano their new head football coach. Normally, this news would not be worthy of a column on Mediaite, but in some ways, this might actually be the most important thing I have written for quite a while.

Greg Schiano is currently getting totally roasted on the Internet and on Twitter, and may end up losing out on the job, because of his extremely tangential, and highly dubious, alleged involvement in the “Penn State Scandal.” Even White House press secretary Sarah Sanders wrote a scathing Facebook post (specifically citing a deceiving Washington Post article, which she has told us usually means it is “Fake News!”) calling for Tennessee to reverse their decision. This was particularly jaw-dropping for me because of her boss, President Donald Trump, once wrote me a note thanking me for exposing how wrong the media’s narrative on “Penn State” had been.

As someone who has researched this entire story far more vigorously than anyone else, and who has no connection to the school, I can say without hesitation that the accusation against Schiano is completely lacking in any credibility or even rationality. In fact, it is overtly laughable.

The backlash against his hire, fueled largely by Tennessee based radio talk show host Clay Travis (he is the guy who recently became “famous” for saying he loves “boobs” on CNN), is based mostly on the claim that Schiano “knew” about Jerry Sandusky’s abuse and did nothing about it. This allegation was based solely on a deposition given in an insurance lawsuit by former Penn State assistant Mike McQueary (the man who claimed to have witnessed Sandusky abusing a boy sometime after around 2000-2001).

Quite simply, this entire story is utterly and obviously ridiculous.

Here are all of the many reasons why it is outrageous that this is even an issue at all:

–McQueary never even claimed to have spoken to Schiano about him supposedly having knowledge of Sandusky’s abuse. They didn’t even coach together during remotely the same time period.

–McQueary only said that another assistant, Tom Bradley (now currently on his way out at UCLA) had told him that there was a rumor that Schiano had heard a rumor that he had some very vague knowledge of Sandusky’s alleged abuse of teenage boys.

–Both Bradley and Schiano vehemently denied the story when it was strategically leaked back in 2016. There is not even a shred of evidence, or even logic, of any kind, substantiating McQueary’s story about Schiano.

–Schiano stopped coaching at Penn State in 1995. The first documented episode where anyone at all was ever notified of any allegation against Sandusky was in 1998 and that was fully investigated by the district attorney and, quite correctly, was dismissed without any charges.

–McQueary never mentioned this rumor in any of his numerous criminal trial testimonies. This was said as part of a deposition in a civil lawsuit. It is quite clear that no criminal trial would have ever let such obviously flimsy hearsay into evidence, yet the news media has wrongly pretended that this statement should be given the weight of actual “courtroom evidence.”

–McQueary had a HUGE self-interest at the time of his deposition to implicate Penn State as much as possible for Sandusky’s crimes. He was suing the university as a “whistleblower” and ended up winning a multi-million dollar judgment against them.

Contrary to the media narrative that McQueary was a great witness, there are many problems with all of McQueary’s ever-changing story. New evidence I have uncovered has persuaded me and at least two of the Penn State administrators who were convicted of misdemeanors in this case, that he not only got the first version (March 1, 2002) of the day of the infamous episode dead-wrong but his second guess (February 9, 2001) at when it happened was also very inaccurate.

Not only that, but if his second date was indeed also wrong, it means that he waited 5-6 weeks (I believe, as do others very close to the case, that the event actually happened on December 29, 2000) before telling Penn State head coach Joe Paterno about it. He then effectively lied about that fact throughout his telling of his story during the Sandusky criminal investigation, which didn’t even begin until ten years after the fact.

The bottom line of this situation is that an obviously innocent man may very well lose a very significant job (and never get hired as a head coach again) based on nothing more than the grossly ignorant “virtue signaling” of the Twitter mob. This is no better (in some ways it is worse) than what they did during the Salem Witch Trials.

This is wrong. It is happening far too often in this strange new era. And, it must stop.