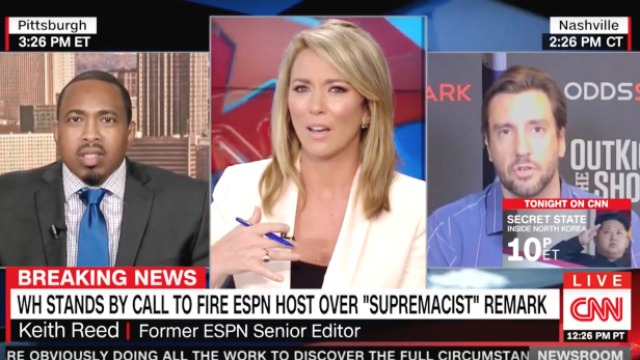 During a discussion about ESPN, Jemele Hill, and the White House’s reaction, Travis told Baldwin that he believes completely in two things: the First Amendment and boobs.

Baldwin was so stunned that she ended the segment early, and she immediately took to Twitter to express her shock:

That was… I just… it was one of those thought bubbles "did he actually say that on MY SHOW?!" Note to men — that is never okay. #smh

Travis himself tweeted about what happened and stood by all of it:

Just went on @cnn and said I only believe in two things completely, the first amendment and boobs and the host lost it. Need video now.

You can't say you like the first amendment and boobs? I say and write it every day. Need to make tshirts now. https://t.co/wRGpzDEKjJ

The rest of Twitter was pretty stunned by it:

Uhhh did anyone else just see that Clay Travis interview on CNN?

Dudes like this give men a bad name. Good lord. https://t.co/O9LA2olZIQ

What was that last segment on @CNN? Clay Travis is usually right about things when it comes to ESPN's liberal bias, but talking about boobs? pic.twitter.com/qTDOJF53eP

If there was an Emmy for reaction shots @BrookeBCNN would win all of them.

That moment where pervert @ClayTravis reduces America to “#1a and boobs.” Go to hell Clay, and good for @BrookeBCNN for shutting it down. pic.twitter.com/MmQB1ZA6SF

For serious. He took this convo off the rails really quickly. Good on @BrookeBCNN for being like "Nope!" https://t.co/l5TjtSM0e2

Because of course this moron @ClayTravis would say something like "he loves the first amendment and boobs." Yes, boobs. He would on CNN pic.twitter.com/bpjKRgHGj7

I don't know who this asshat was just on @CNN saying "I believe in the first amendment and boobs," but they should have kicked him off air.

A) Funniest part was @BrookeBCNN spelling out B-O-O-B-S, like it was saying the f-word
B) Felt like @ClayTravis forcing a viral moment a bit

As soon as I saw Clay Travis's face on CNN, I turned it off. And then: https://t.co/l9eNaqaoj1

There are so many insightful voices in sports media. Yet, somehow, Clay Travis keeps getting held up as someone whose name is a must book.

The fact that Clay Travis thinks going on national television & being a misogynistic jerk is cute, tells u everything u need 2 know abt him.

CNN – Yes, this is gonna get shared around and “Woo!", but you didn’t need to put the troll on TV in the first place. https://t.co/G7kNgQsYEw

The stupid Travis segment is going to be a Twitter culture-war flashpoint within the hour, isn’t it