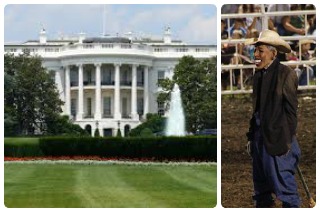 A silly controversy surrounding a Missouri rodeo clown’s decision to don a mask of President Barack Obama before taunting bulls to attack him – a traditional practice in American rodeo culture – became frighteningly serious on Wednesday. Rather than push back against the overwrought response from some Obama supporters, offended by the mockery of the president, the White House has tacitly condoned their response. Clown-gate is no longer a laughing matter.

A brief roundup of the reaction from a variety of sources which has followed the public mockery of the president is already sufficiently shocking:

The rodeo clown and the organization that hired him have apologized for the incident. The president of the Missouri Rodeo Cowboy Association has resigned and the clown has been “banned for life” from performing at the state fair. A number of state officials have condemned the clown and the NAACP has called for a full investigation into the incident.

But the worst was yet to come. On Wednesday, White House spokesman Josh Earnest was asked to react to the controversy surrounding the clown’s actions. Rather than refuse to answer the question, the Missouri native said that the event was “certainly not one of the finer moments in our state.”

Some have suggested that President Obama take time away from his vacation to address the hyperbolic reaction his supporters have displayed over his mockery. This would have been an unnecessary elevation of the incident, not to mention a diminution of the office’s stature. That is, it would have been until today.

RELATED: Obama Spokesman on Rodeo Clown: ‘Not One of the Finer Moments’ for Missouri

Now that the White House has weighed in on the incident via an official spokesperson, and their response was to lament on how the incident reflects negatively on the state of Missouri, the only conclusion we are left to draw is that this White House condones the absurdly defensive overreaction. This is what anyone who dares mock the president is due.

This is a disturbing and, frankly, terrifying development. Any classical liberal should be offended at the prospect that a presidential administration would use its considerable leverage to justify the suppression of the right of average citizens to freely mock and deride the political class without the fear of reprisal. Indeed, lampooning and creating caricatures of political figures is a foundational American value. To attack that value is to attack what it means to be a citizen of the republic.

We can draw only one conclusion from Wednesday’s events. The president will not weigh in on the controversy, not because he does not think this event should not be elevated beyond its present outsize stature, but because he does.