The Women of Outnumbered Scoff at Clinton, Think Sanders is Better for Women
video

The Women of Outnumbered Scoff at Clinton, Think Sanders is Better for Women 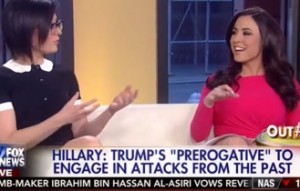 It’s no surprise that the women of Fox’s Outnumbered don’t like Hillary Clinton, but today, while discussing the holes in her feminism-first campaign, they said something pretty shocking: they think that Bernie Sanders is resonating very well with young women.

In the latest installment of Clinton and Donald Trump‘s battle over sexism, Trump appeared on Fox News Sunday to call Clinton more of an enabler for husband Bill Clinton‘s infidelity than a victim of them. According to Trump, she’s treated the women her husband was involved with terribly, ruining their lives, which isn’t very feminist of her at all.

While all of this has been going on, other candidates have been staying out of it and working toward the presidency without the discussion of the Clintons’ sex lives. (Ted Cruz and Sanders have both been doing very well in the polls as Clinton and Trump have been bogged down with more salacious topics.)

“You know who resonates with younger women, and younger men?” asked Fox’s Kennedy, after Andrea Tantaros pointed out that Clinton expects to win by galvanizing the same young women who voted Barack Obama into office. “Bernie Sanders! He’s very much helped by youthful passion.”

Kennedy then went on to say that she thinks Clinton is being too Machiavellian by “getting in the mud” with Trump and is ignoring a key part of his campaign that could ultimately win her the presidency. To find out what that could be, watch the video above.