Throughout this election season, Donald Trump has been drawing comparisons to Adolf Hitler from his detractors. There have been quite a few of these comparisons, in fact. One comparison, however, was inadvertently made years before Trump bursted onto the campaign scene with his “Make America great again!” slogan.

The Boy in the Striped Pyjamas is a movie from 2008 that explored what the Jewish extermination camps of Hitler’s Germany looked like by framing events from the perspective of a young interned boy and the young son of one of the camp’s head officers.

There is a poignant scene during which the son of the commandant talks to his sister about what their father really does after he discovers the true nature of the nearby camp. After he calls the camp a “horrible place,” his sister tells him this:

It’s only horrible for them, Bruno. We should be proud of Dad, now more than ever before. He’s making the country great again.

Here is a screen capture of the subtitled scene, courtesy of Joanna Nelson: 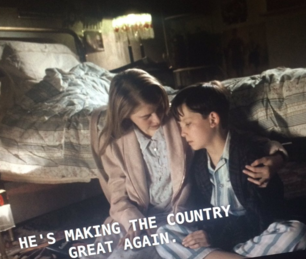 While the character was not referring directly to Hitler, she was referring to those working for him and carrying out his plans. This week, one of the top trending news stories was about one of Trump’s right-hand men, Corey Lewandowski, who allegedly manhandled reporter Michelle Fields at an event and faced no repercussions from his boss or anyone else, leading to an exodus at Breitbart.

Certainly, comparisons to Nazi Germany are serious business, and whether Trump and his crew warrant them or not is completely subjective. What is not debatable is how uncomfortably and coincidentally topical this is.