They Should Have Listened To Feingold: Obama Vs. The Only Senator Who Voted Against The PATRIOT Act
video

They Should Have Listened To Feingold: Obama Vs. The Only Senator Who Voted Against The PATRIOT Act 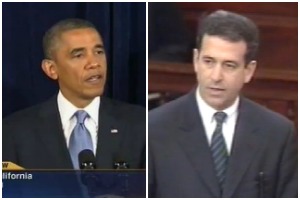 Today, the President of the United States made the case for Big Brother. Yes, he said we should have a public dialogue about these issues, but the fact that it took a bunch of high-profile leaks to make him say that means it’s a load of bullshit anyway. If Obama really wanted debate on these issues, more debate would have been encouraged before quiet and not-much-talked-about votes on PATRIOT Act and NDAA reauthorizations.

On that latter point, it’s worth pointing out two things about the National Defense Authorization Act for 2012. One, Obama’s signing of it went under the radar since it happened on New Year’s Eve. And in a statement following his signing of the NDAA, Obama actually said this:

The fact that I support this bill as a whole does not mean I agree with everything in it. In particular, I have signed this bill despite having serious reservations with certain provisions that regulate the detention, interrogation, and prosecution of suspected terrorists.

Just so we’re clear: infringing on the legal rights of people suspected of terrorism is against our values, but collecting massive amounts of data from Americans who haven’t even been charged with a crime is A-OKAY!

RELATED: Obama Addresses NSA Uproar: ‘Nobody Is Listening To Your Phone Calls,’ ‘You Can’t Have 100% Privacy’

But now, the debate is now underway, and one of the central arguments comes down to this: should the government have whatever resources it needs to prevent terrorist threats?

When the United States Senate voted on the USA PATRIOT Act in 2001, the vote was 98-1 with one abstention. That means only one senator voted against it. That senator was Russ Feingold, and the speech he gave on the Senate floor over a decade ago contains one of the best arguments against government surveillance ever delivered by a public official.

Now, in fairness, when the PATRIOT Act came up for re-authorization in 2006, Feingold was joined by nine other senators to oppose it (Obama wasn’t among them). But Feingold was the only member of the U.S. Senate who from the very beginning didn’t get caught up in the post-9/11 “if we don’t infringe on our cvil liberties, the terrorists win” fervor.

Feingold’s full statement is worth watching, and is embedded below, but I’d like to contrast a portion of what he said with Obama’s comments (emphasis mine).

I think it’s important for everybody to understand, and I think the American people understand, that there are some trade-offs involved. You know, I came in with a healthy skepticism about these programs. My team evaluated them. We scrubbed them thoroughly. We actually expanded some of the oversight, increased some of the safeguards. But my assessment and my team’s assessment was that they help us prevent terrorist attacks. And the modest encroachments on privacy that are involved in getting phone numbers or duration without a name attached and not looking at content — that on, you know, net, it was worth us doing.

We do have to make choices. But Feingold understood back then that the choice isn’t that simple:

Some have said rather cavalierly that in these difficult times we must accept some reduction in our civil liberties in order to be secure.

Preserving our freedom is one of the main reasons that we are now engaged in this new war on terrorism. We will lose that war without firing a shot if we sacrifice the liberties of the American people.

That is exactly the argument civil libertarians need to be making. We have no problem with the government taking certain steps to prevent acts of terrorism, but at what point can we draw the line? Should the government use every tool at its disposal to go after terrorists or do we need protections in place so that the Fourth Amendment isn’t viewed as a minor nuisance?

Now, in fairness, Obama was at least slightly more nuanced in his remarks than Independent Senator Angus King, who said if Obama cancelled this program, it could lead to a “nuclear attack on Miami.” This is a bullshit straw man argument, since even the most radical civil libertarian recognizes that we need the government to protect us from terrorist threats; we would just like them to be smarter and less intrusive about it.

In his 2001 speech, Feingold went on to decry the speed with which the Bush administration tried to push anti-terrorism language through Congress without much time for debate. And Congress does have some blame here, because with the exception of Ron Wyden, Rand Paul, Jeff Merkley, Bernie Sanders, and maybe one or two other senators, no one in Congress has really been outraged about this, at least not at the level they are about the IRS.

Not to take anything away from the executive branch’s direct culpability here, but Congress was their rubber stamp. And since 2001, while more legislators have come around on these kinds of programs, their silent complicity is what helped expand this in the first place.

They should have listened to Feingold.