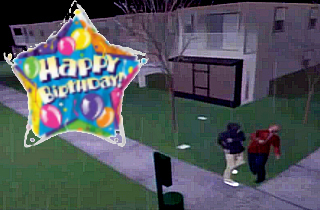 Oh, Craigslist. You are so helpful for finding last-minute tickets, used vinyl records, and perfectly good furniture. You’re also good for reminding us that ridiculous people exist. In this case, specifically, people who enjoy watching actors role-play the George Zimmerman/Trayvon Martin altercation at a birthday party on Long Island.

“HI MY FRIENDS AND I ARE HAVING A PARTY THIS WEEKEND AND WE ARE LOOKING TO HIRE TWO ACTORS TO COME IN AND ROLE PLAY THE TREVYON MARTIN/GEORGE ZIMMERMAN ALTERCATION,” the spelling-error-laden advertisement screams in all-caps.

The ad doesn’t specify whether the actors should be lookalikes or just people of similar complexion, but, “ONE PERSON WOULD BE SMALLER AND THE OTHER A BIT BIGGER. ITS A JOKE AND WOULD ONLY GO FOR ABOUT 5 MINUTES. EMAIL ME IF YOU’RE INTERESTED AND I’LL GIVE YOU SOME MORE IDEAS.”

What kind of party is this?!?! Is it some kind of twisted sex/voyeur party? No, says the headline seeking actors for a “non-sexual” role. (Though, it does specify that this is for “comedy,” so ha?). So who’s it for?

THE PARTY ITSELF IS A BIRTHDAY PARTY FOR A GROUP OF PEOPLE IN THEIR 30’S. EVERYONE IS COMPLETELY PROFESSIONAL. YOU CAN CHECK OUT MY FACEBOOK PAGE AND OTHERS IF YOU LIKE. ITS GOING TO BE IN THE BACKYARD OF A VERY NICE HOME IN ROCKVILLE CENTRE, LONG ISLAND. 35 MINUTES BY TRAIN FROM PENN STATION

Well, there you have it. A bunch of drunken, “completely professional” 30-somethings are looking to laugh at a five-minute-long re-enactment of a violent brawl that ended with a dead 17-year-old boy. Apply within.

Add this supremely bizarre Craigslist ad to the one we reported months ago about a Virginia couple seeking a Pat Robertson lookalike to stand over them and condemn them while having sex.