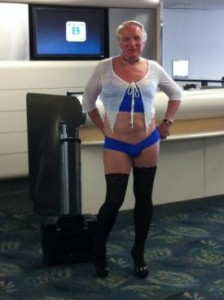 Has your Wednesday been weird enough? No? Well, let’s do something about that, guys.

We already know you can run into trouble with airlines for wearing exceptionally saggy pants or for excessive enjoyment of Nachos Bell Grande or for breathing. But did you know you can get away with flying whilst wearing little more than women’s lingerie and a festive shrug from Dress Barn? It’s true! Unless you’re a woman, probably.

SFGate shares a photo, taken by U.S. Airways passenger Jill Tarlow, of a particularly jaunty man waiting for his June 9th flight from Ft. Lauderdale to Phoenix. The picture shows the smiling, silver-haired individual wearing deep blue underwear with a matching bra top, a sheer white shrug, black knee-highs and black platform heels. More of a supermarket shopping outfit than something suited for air travel, but, hey. At least it looks terribly uncomfortable.

The airline permitted the man to fly despite complaints from some of his fellow passengers because, hey, it’s not like his bells and whistles were out:

US Airways spokeswoman Valerie Wunder confirmed she’d received the photo before last week’s incident in San Francisco and had spoken to Tarlow, but said employees had been correct not to ask the man to cover himself.

You know, sort of like how University of New Mexico football player DeShon Marman‘s private parts were showing when… Oh, wait. Hmm. This is a tricky one. One thing is for certain, though: Marman’s lawyer isn’t too happy about it.

A white man is allowed to fly in underwear without question, but my client was asked to pull up his pajama pants because they hung below his waist.

In any case! Ladies. Gentlemen. Please don’t board a plane dressed like this. Do you realize how many people leave… fluids… on airplane seats? The baby crying blood murder in the aisle behind yours? The woman nervously chatting your ear off about this being her first flight as she nervously grasps at the sick bag on her lap? That exceedingly drunk man with the enlarged prostate? It all ends up on your seat, lovelies. Wear pants! They’re so great!