Time for Conservatives to Reject Ann Coulter for Good 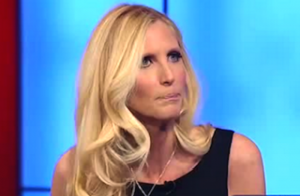 Ann Coulter first rocketed to conservative stardom because she possesses two things so many in Washington desperately lack: razor-sharp wit, and a willingness to say exactly what she’s thinking. Perhaps more importantly, she isn’t afraid of tackling issues that GOP leadership considers too hot to handle. Her most recent book “Adios America!” has shot to the top of the bestsellers lists by tackling the one issue many conservatives care the most about: illegal immigration.

That point was proven ten times over in her most recent column, in which Coulter, based on seven incidents over a course of eight years, decides that “there’s a cultural acceptance of child rape in Latino culture.” To reiterate, based on seven instances, Coulter declares that the entire Latino culture — including about 604 million Latin-Americans and more than 50 million Latino-Americans — are accepting of child rape.

Coulter doesn’t even bother offering up any statistics proving Latinos are more likely to commit child rape, just anecdotes. Her rather weak response is, “When the crime is this bizarre, it’s not ‘anecdotal.’” Instead she offers up outsourced allegations that in immigrant communities, police don’t ever bother investigating statutory rape when 12-year-olds give birth. “This happens all the time, they say,” Coulter writes, since apparently “they” never provide their names or a shred of evidence.

As a conservative, I believe we ought to tell uncomfortable truths about correlations in race and crime… when done in a thoughtful manner. When liberals play up the dozen or so white-on-black murders a year, conservatives are right to point out that the thousands of black-on-black murders are a far greater problem. When CNN’s terrorism expert argues that, hey, maybe terrorist Muhammad Youssef Abdulazeez wasn’t a Muslim, he deserved to be mocked for his intentional obtuseness. When liberals tiptoe around politically-incorrect truths, conservatives ought to be the ones unafraid of telling people what’s what.

And as a Latino, I’m not happy that we are much more likely to end up in federal prison, and that so-called Latino “leaders” seemingly have no intention of ever denouncing the mass law-breaking committed by millions of undocumented immigrants. And yes, there are probably some crimes we commit at higher rates than other ethnicities (my white relatives never took me to a cockfight). I don’t believe we should shy away from difficult questions if it means addressing and ending those disparities.

But to Ann Coulter, there is no difference between illegal Latino immigrants and legal Latino immigrants. And there is no distinction between the vast, vast majority of Latinos who are law-abiding citizens, and literal child rapists. Instead, she just completely invents a made-up child rape crisis and offers up zero evidence for its existence. This is not just a critique of Latino culture devoid of nuance, it’s a critique devoid of reason itself.

I understand that Coulter’s writing style relies on irreverence, and that she has never shied away from politically incorrect jokes at Hispanics’ expense. But in recent months, those “jokes” have taken a dark turn into blatant dehumanization. “You have to understand,” she recently said, “screaming and defacing things is how Latin-Americans express disagreement.

In general, I’m not a fan of the idea that the entire conservative movement is responsible for one of their members (that logic never seems to extend to liberals and Louis Farrakhan). But Coulter only receives the small shred of respectability she does because thousands of conservatives buy each book she pumps out every year or so, and because conservative media outlets continue to run her column and book her for appearances. I can’t understand why openly anti-Semitic and anti-black racists are rightfully ostracized by the right, and Coulter is so adored.

There are some good signs that Coulter’s star is already fading. CPAC’s organizers — who aren’t exactly known for being squishy moderates — banned Coulter this year despite being a crowd favorite. It’s time for the rest of the conservative movement to do the same.