Why Are OWS Protesters Scuffling With Police | Mediaite
VIDEO 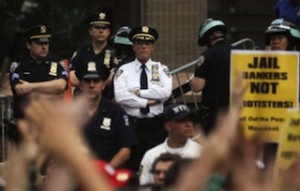 When Brookfield Office Properties, the company running Occupy Wall Street‘s home base, decided to postpone the cleaning of Zuccotti Park and therefore not displace the OWS crowd, New York Mayor Michael Bloomberg bemoaned the decision, saying in a radio interview Friday morning that if they decide to go ahead with the plan at a future date, “it will be a little harder, I think, at that point in time to provide police protection.” His sentiment was that the protesters might have felt a little emboldened by their minor victory, and will assume they can just whip out the brooms and Windex next time it comes up, expecting the same result. The subsequent march to Wall Street, where police had garbage and bottles thrown at them, helped bolster Bloomberg’s view.

Early Friday morning in Denver, Colorado State Police cleared out Occupy protesters in front of the Colorado Capital, announcing that the park had been closed indefinitely, per executive order. The protesters antagonized the police, shouting at them and refusing to leave the park. Twenty-three arrests were made. The Denver Post captured video of the police action, including an unintentionally funny moment at the start, when a bearded man started wildly yelling “PEACEFUL!” over and over as he was removed from the area. Protesters chanted “Shame!” at the police. Someone held up a piece of paper with a peace sign drawn on it and floated it in the cops’ faces. And a group of what appear to be roaming goths went down the line of riot police saying, “Shame on you, shame on you,” to each officer (at about the 1:39 point):

There’s a very telling quote at the end of the Denver story, when a protester named “Chris” — one of the last to leave — tells Post writers Sara Burnett, Weston Gentry and Kieran Nicholson that the police gave him the option to either go home or be arrested. Chris chose the former.

“I don’t want to pay a fine to finance more billy-clubs and tear gas to be used to repress my brothers and sisters.”

It’s amazing that these officers, suddenly cast as enemies by some of the Occupy protesters, have enough self-control to stand stone-faced and not knock out the people going down the line saying “shame on you” to each of them. It’s borderline insane that after all the insults and slights the crowd had thrown at them all morning long, the police still saw Chris hanging around, and gave him the option to go home. The Colorado State Police saved him hundreds of dollars in fines and a blemish on his record, and he still sulked off with a surly little attitude.

It’s time for the Occupy protesters to stop throwing garbage at police and start respecting the fact that they’re in the same boat. Most cops struggle with bills, pay what they feel is too much in taxes, face layoffs every time a budget negotiation comes up, and put their lives on the line every day for the same people who are chanting “shame” at them. There is a strong undercurrent of protesters urging people to respect the police, reminding everyone else that they are part of the 99% they claim to represent. But with spazzing idiots screaming “Peaceful” as they’re being arrested, it looks like it’s still a tough sell.

If the police are showing up in riot gear asking you to leave — whether they personally want to be there or not — they’re probably going to get you out of there, one way or another. So it might be best to pack up the tent and go home without incident. Live to fight another day. Use the money you save on bail to buy more brooms and peanut butter. Not every officer, after all, is going to offer the same deal as they did to Chris. But the fact that at least one did is reason enough to show the police a little more respect for as long as the protests go on.