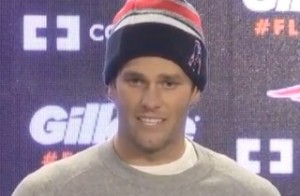 “I am very disappointed by the NFL’s decision to uphold the 4 game suspension against me,” he said in a Wednesday Facebook post. “I did nothing wrong, and no one in the Patriots organization did either.”

“Despite submitting to hours of testimony over the past 6 months, it is disappointing that the Commissioner upheld my suspension based upon a standard that it was ‘probable’ that I was ‘generally aware’ of misconduct,” Brady continued. “The fact is that neither I, nor any equipment person, did anything of which we have been accused. He dismissed my hours of testimony and it is disappointing that he found it unreliable.”

Brady also addressed press reports that Goodell inferred his guilty after learning he destroyed his cell phone. “I replaced my broken Samsung phone with a new iPhone 6 AFTER my attorneys made it clear to the NFL that my actual phone device would not be subjected to investigation under ANY circumstances… To suggest that I destroyed a phone to avoid giving the NFL information it requested is completely wrong.”

“Lastly, I am overwhelmed and humbled by the support of family, friends and our fans who have supported me since the false accusations were made after the AFC Championship game,” he concluded. “I look forward to the opportunity to resume playing with my teammates and winning more games for the New England Patriots.”