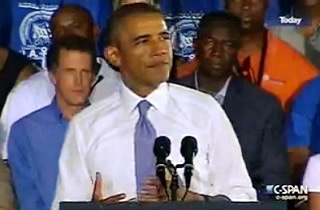 Conservatives are having the time of their lives over President Obama‘s appearance on The Tonight Show with Jay Leno Tuesday night, for making what one website described as a “staggering geographical gaffe.”

At the risk of drawing a Drudge link, and the attendant avalanche of hooting, it should be pointed out that Tuesday night was not the first time the President referred to Atlantic coast cities as gulf ports.

Several conservatives, including Glenn Beck, have pointed out that when the President said “If we don’t deepen our ports all along the Gulf — places like Charleston, South Carolina, or Savannah, Georgia, or Jacksonville, Florida,” he was listing cities that aren’t actually along the Gulf Coast,

Newsbusters‘ Tom Blumer also pointed out that The Associated Press cleaned up the quote with a parenthetical “(and in) places like,”

Unfortunately for the AP, that doesn’t appear to be what the President meant to say at all. Aside from the lack of any sort of indicative pause, the President has referred to these cities in the same way on two other occasions. Here’s the President’s Tonight Show “gaffe,” followed by a portion of his July 25 speech in Jacksonville, Florida:

July 25 Transcript via The White House:

“And then private companies came onboard here at Jaxport. They saw it as a good investment. And we’re building the same kind of partnerships across the country — especially, by the way, in some of these Gulf ports — Charleston, Savannah. And now, these ports are on track to be better prepared for those supertankers and their cargo loads ahead of schedule. “

That July speech also wasn’t the first time the President made such a reference. In remarks at an Atlanta, Georgia DNC event on May 19, the President said “Roads, bridges, ports all across the Gulf — I was down in Costa Rica meeting with the Central American Presidents, and I was reminded once again, Panama is revamping its canal; they’re going to be bringing in these mega-container cargo ships. And right now a bunch of those ships can’t dock in our ports all along the Gulf — Georgia, South Carolina, Louisiana. And if we don’t revamp those, we’re going to lose business.”

Blumer’s criticism of the AP is fair, if a bit overheated, but the reason I keep putting “gaffe” in quotes is because I’m not convinced that this really qualifies. Yes, it’s true that if President George W. Bush or not-President Mitt Romney had made a similar statement, it would have been pointed and laughed at by liberal detractors, but I doubt it would have caught on like some of their other flubs. Like most of President Obama’s infrequent gaffes, this one just isn’t all that funny. Another reason that gaffes don’t stick to this president is that, fair or not, they don’t fit an established narrative for him. When John McCain refers to “Czechoslovakia,” it’s funny because he’s old, and when Sarah Palin says North Korea is our ally, it’s funny because of her overbearing jingoism and perceived dimness. When then-Senator Obama groused about the price of arugula in 2007, that was funny.

But there’s also the issue of whether this even qualifies as a gaffe. The President didn’t say these cities were on the “Gulf Coast,” and while calling them “gulf ports” is an error, his meaning was clear in each instance: ports that service ships coming through the Gulf of Mexico’s shipping lanes. In fact, the President may have been referencing the gulf stream, the current those ships would travel to ports in Jacksonville, Savannah, and Charleston. The fact that it was included in two other speeches supports the idea that this was an ill-considered attempt at shorthand. I don’t think anyone honestly believes that the President doesn’t know where the East Coast is.

In any case, conservatives are entitled to have all the fun they can wring out of this, but maybe they could clear a little time in their chortling schedules to pressure their own lawmakers to act on the very policies that the President was espousing. Snark doesn’t create many jobs, but upgrading our ports will.