Totally Worth It: Chinese Teenager Sells Kidney For An iPad 2 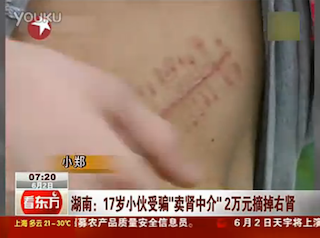 Some people just really love their Apple products. In China, a 17-year-old boy returned home one day with a new laptop and iPad 2. His mother asked him how he’d gotten them and eventually he had to reveal the big, red scars going up the side of his body. Yep, he’d sold his kidney for an iPad.

“‘I wanted to buy an iPad 2, but I didn’t have the money,’ the boy told Shenzhen TV in the southern province of Guangdong, ‘When I surfed the internet I found an advert posted online by agent saying they were able to pay RMB20,000 to buy a kidney.’ After negotiations, the boy travelled north to the city of Chenzhou in Hunan Province where the kidney was removed at a local hospital which discharged him after three days, paying a total of RMB22,000 for the organ.

Trading organs online is a common practice in China, despite repeated attempts by China’s government to stamp out the practice. Last year Japanese television reported that a group of ‘transplant tourists’ had paid £50,000 to receive new kidneys in China.”

Apparently, the black market organ trade is a huge problem in China. The Telegraph goes into more depth but one disturbing detail is that the hospital where the operation took place fully admits that they leased out their urology department to “private businessmen.” I suppose that’s one way to pay for shiny, new bed pans.

But what about the boy? We can make fun of him all we want, but this story reminds me of what I learned about cognitive dissonance back in school. When a person goes through a rough experience to obtain something, the mind will then work extra hard to rationalize it. For example, if someone endures extreme hazing to join an organization, the mind will then “protect” them by creating feelings of extreme loyalty afterwards. This is because, if they didn’t feel that way, then why did they agree to go through what they did?

I guess what I’m trying to say is, while we may like playing Angry Birds on our iPads, this kid is going to f**king love it.

Below, watch what I believe is the news story about the boy. Shanghaiist embedded it in their post on the story so I’m assuming it’s related but, as I only speak Amurrican, I have to take their word on it.