Trailer For Innocence Of Muslims: Film That Sparked Anti-U.S. Protests In Egypt, Libya 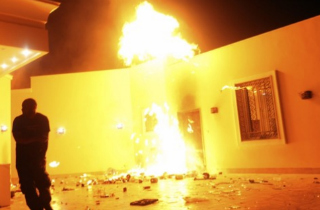 A U.S.-produced film, Innocence of Muslims, has garnered attention after the recent breach of a U.S. embassy in Egypt and an attack on a U.S. consulate in Libya, which killed the American ambassador to Libya along with three other staffers. The film’s producer and director, Sam Bacile — who is an Israeli-American and California real estate developer — is now in hiding.

Protesters argue the film is offensive in its portrayal of the Prophet Muhammad. In the two-hour film, he’s portrayed in unflattering light as someone who approves of child sex abuse and extramarital sex, among other things — and calls a donkey “the first Muslim animal.”

Bacile said ” he raised $5 million from about 100 Jewish donors, whom he declined to identify. Working with about 60 actors and 45 crew members, he said he made the two-hour movie in three months last year in California.”

“It is an American production, not designed to attack Muslims but to show the destructive ideology of Islam,” he said in a statement. “The movie further reveals in a satirical fashion the life of Muhammad.”

According to The New York Times, the 14-minute trailer for the English-language film was posted on YouTube in July,” but drew attention last week “when a version dubbed into Arabic was posted on the same YouTube channel and then copied and viewed tens of thousands of times more.”

Bacile said he intended the project to be a political statement, not a religious one. On the phone from his hiding place, he told the Associated Press, “Islam is a cancer, period.”