Trump and Putin Had a Second, Informal Meeting During G20 Summit

Trump and Putin Had a Second, Informal Meeting During G20 Summit

It turns out that President Trump had a second, more informal meeting with Vladimir Putin during the recent G20 summit.

Ian Bremmer, the President of Eurasia Group, told Charlie Rose about the meeting in an interview today. He said this meeting lasted an hour.

Readout from Trump Admin on what was/wasn't discussed in official meeting w Putin useless when there was 1 hour convo off books that eve.

Officials have confirmed to multiple news outlets that this conversation took place:

White House official confirms to @kwelkernbc Trump and Putin spoke privately on the margins of a G-20 dinner. Was previously undisclosed. https://t.co/hqULLe2KYS

White House confirms Trump & Putin met a second time at the G-20. @ianbremmer says it lasted an hour and only other was a Putin translator.

UPDATE –– 6:41 pm ET: While this meeting is just now getting attention, it’s worth noting this tweet from July 8th from Alberto Nardelli at BuzzFeed News:

UPDATE 7:57 PM ET: The White House has issued a statement, claiming it wasn’t a meeting but rather a brief conversation: 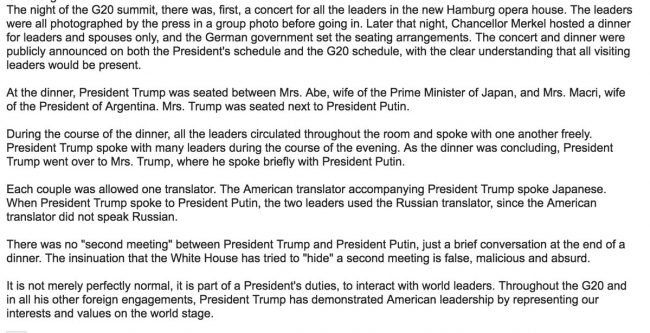