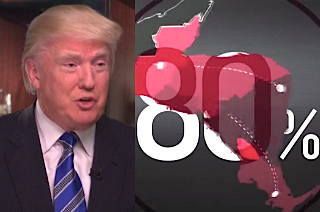 Donald Trump has never been one to apologize. And at this point, he has doubled, tripled and quadrupled down so hard on his presidential campaign announcement comments characterizing Mexican immigrants as “rapists” that he has no real choice but to find some sort of justification for his blatantly inflammatory words.

The candidate’s latest explanation for why he has been repeatedly calling Mexican immigrants “rapists” came during a preview clip from interview with CNN’s Don Lemon that will air later tonight.

“If you go to Fusion, you will see a story: About 80% of the women coming in — you know who owns Fusion? Univision!” Trump told Lemon. “Go to Fusion and pick up the stories on rape. And it’s unbelievable when you look at what’s going on. So all I’m doing is telling the truth,” Trump told Lemon.

To find the answer to Trump’s question, we can turn to the Fusion article he loves so much. Headlined, “Is rape the price to pay for migrant women chasing the American Dream?” the 2014 piece, written by Erin Siegal McIntyre and Deborah Bonello, found that “a staggering 80 percent of Central American girls and women crossing Mexico en route to the United States are raped along the way.” According to Fusion’s reporting, “perpetrators can be coyotes, other migrants, bandits, or even government authorities.”

So yes, Donald, “somebody’s doing the raping.” But in his original comments, he explicitly said that Mexico is “sending” these rapists to the United States. “What do you think they’re going to send us their best people, their finest people?” he asked in a follow-up interview. “The answer is no.”

While it’s possible, as the Fusion article reports, that some of these rapes are being committed by fellow migrants, the larger problem they are describing stems from gangs that control territory south of the border forcing women to “pay” for their passage with sex. That does not mean, as Trump has never stopped insisting, that Mexico is somehow sending all of its “rapists” to the United States.

One ironic outcome of this whole saga is the Google results that come up when one searches, for instance, “Mexican rapists.” While that query may have once brought up Fusion’s insightful, nuanced story, now it’s nothing but Trump’s nonsense.