Trump Defends Giving Russians Classified Information in New Tweets: ‘I Have the Absolute Right To Do’ It 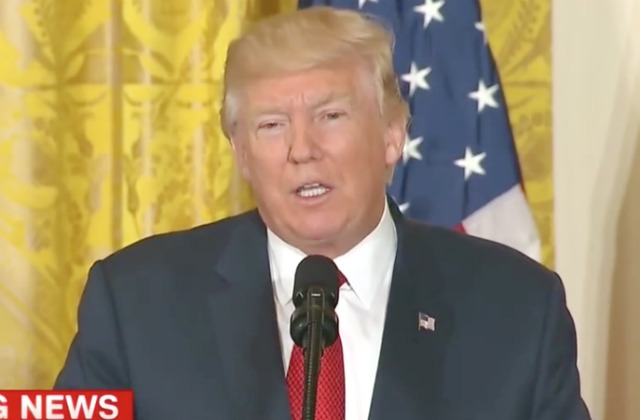 In his first Tweets since the Washington Post released their Monday night bombshell report, President Trump essentially confessed that he shared highly-classified intelligence with the Russian officials he hosted at the White House last week.

As President I wanted to share with Russia (at an openly scheduled W.H. meeting) which I have the absolute right to do, facts pertaining….

…to terrorism and airline flight safety. Humanitarian reasons, plus I want Russia to greatly step up their fight against ISIS & terrorism.

While Trump is legally permitted to disclose classified information, the revelations from last night have sparked numerous questions about whether Trump should’ve done that instead of going through standard protocol. Trump was still taking blowback from his firing of James Comey before the report came out, and now, Trump is taking fire from those who say it was hypocritical of him to do this after rising to the presidency by blasting Hillary Clinton and other “leakers” who unveil government information.

Trump’s tweets come after his National Security adviser, H.R. McMaster, insisted to reporters that the president did not discuss “intelligence sources or methods” with the Russians. However, McMaster conspicuously declined to refute the key element of WaPo‘s report which dealt with the fact that sensitive information was shared.

I have been asking Director Comey & others, from the beginning of my administration, to find the LEAKERS in the intelligence community…..

Interestingly enough, Trump’s new tweet comes shortly after Fox & Friends talked with Laura Ingraham about how leakers in the government are harming the security and functionality of the government.