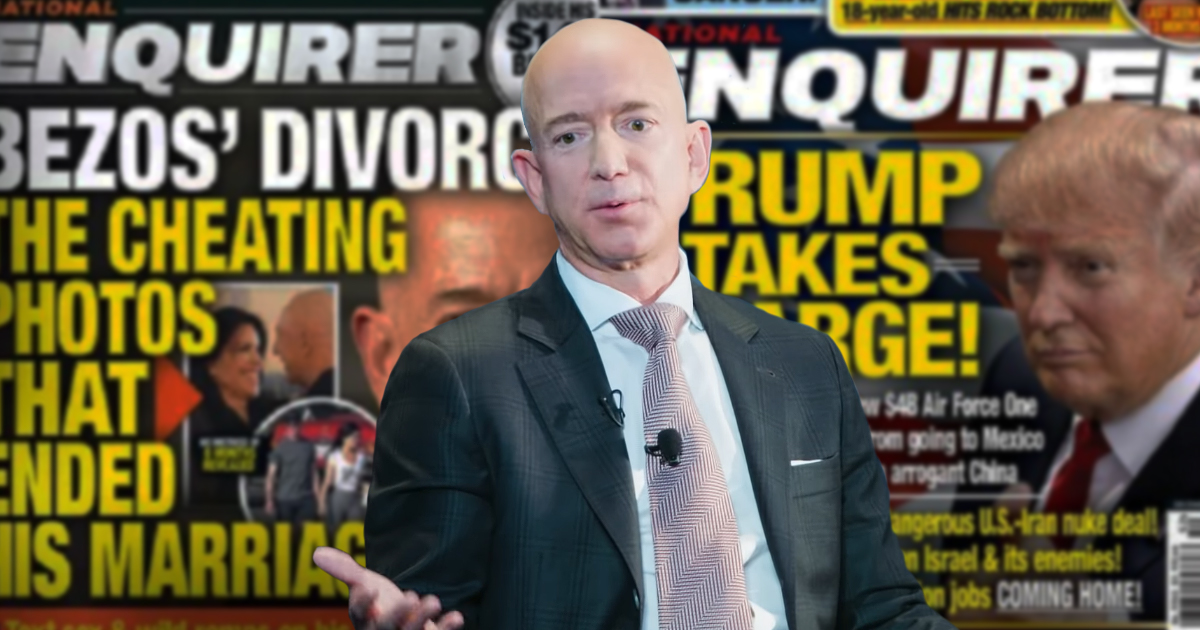 Jeff Bezos is the richest man in history, and he’s getting a divorce. The President of the United talked about it today, and the National Enquirer appears to be taking credit for it going public. CNN is asking why, and the world is pondering privacy once again, in a drama that will unfold in the public square for likely months ahead.

Here’s what’s happened so far. On Wednesday, Amazon CEO Jeff Bezos announced that he and his wife are getting divorced. On Thursday, President Donald Trump commented with a smirk, a subtle jab at his long-time foe, who not only has previously questioned Trump’s actual net worth but who owns the Washington Post, a decidedly Trump-unfriendly press outlet.

Also on Wednesday, the National Enquirer basically took credit for Bezos going public – an almost certainly true claim, considering that the fact that they were preparing to publish news of the divorce along with their story of an alleged affair.

In the statement that the Enquirer published on their site regarding the upcoming edition, the tabloid claimed their story “is the real reason why Bezos, one of the world’s most powerful men, took to Twitter on Wednesday to announce his shock divorce.”

Our reporters snapped the braggadocios billionaire and his raven-haired lover, 49, doing the dirty on their spouses together no fewer than six times in 14 days.

CNN’s Oliver Darcy and Brian Stelter explored the idea that Trump, who has, or least had a special relationship with the tabloid and its parent company, could be the reason his long-time enemy was under the paparazzo microscope.

“Media insiders immediately wondered about a Donald Trump connection,” they wrote, “given that the president has repeatedly criticized Amazon as a company and Bezos as an individual.”

Parent company American Media Inc., however, famously gave up Trump as part of an arrangement with prosecutors over the Karen McDougal/Donald Trump affair story.

The fact that the paper essentially stopped covering Trump stories after that “would seem to challenge the theory that the Enquirer is out to get Bezos because Bezos is on Trump’s enemies list,” said the CNN article.

They also quoted a source as saying that it’s “fanciful” to blame Trump and they took the story because Bezos is “the world’s richest man and a newsworthy subject.”

That’s a true enough statement; Bezos is a ubiquitous subject of news in addition to being a source and curator of it.

If you’re thinking there’s an irony in Bezos having perhaps his privacy violated by someone tracking his activity, considering the many privacy issues surrounding Amazon and other tech companies’ user of customer data and the privacy questions raised by the increasingly omnipresent Alexa/Echo products, you aren’t alone. It has come up, and it relates in the details as well as the overall story.

Whether the Enquirer was after Bezos out of partisan spite or were simply chasing a salacious tale about the famous wealthiest man, it doesn’t change the other twist here. They quashed stories about one purported billionaire having a juicy affair, and pursued a story about that billionaire’s billionaire foe for four months.

If anything, it’s certainly a different approach.