Trump Goes to Bat For Trump Jr.: ‘This is the Greatest Witch Hunt in Political History’

Trump Goes to Bat For Trump Jr.: ‘This is the Greatest Witch Hunt in Political History’ 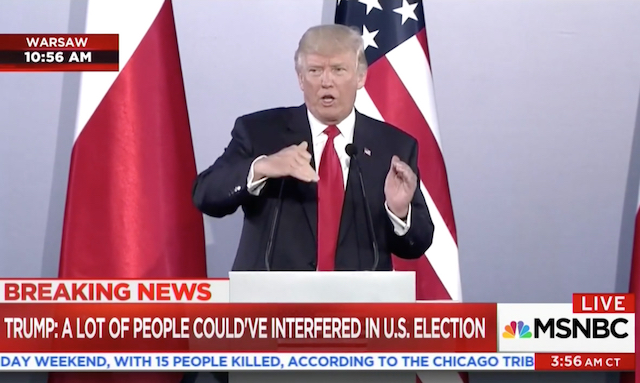 With emails released by the younger Trump showing a clear desire to collude with the Russian government to undermine Hillary Clinton, President Trump has struggled to coordinate an official White House response.

After first distancing himself from the meeting with a Russian lawyer, the most President Trump would say was that his son was a “high quality person” and very “transparent.”

On Wednesday Morning, Trump Sr. returned to Twitter, however, to his assert his son’s innocence and praise his Tuesday night performance on Hannity. The president also added that the imbroglio into Trump Jr.’s emails were “The greatest political witch hunt in political history”

My son Donald did a good job last night. He was open, transparent and innocent. This is the greatest Witch Hunt in political history. Sad!

He also slammed the “fake media” — because of course.

Remember, when you hear the words "sources say" from the Fake Media, often times those sources are made up and do not exist.

Even a glancing look at the presidential Twitter feed reveals that there may be a lot of witches in Trump-land.

You are witnessing the single greatest WITCH HUNT in American political history – led by some very bad and conflicted people! #MAGA