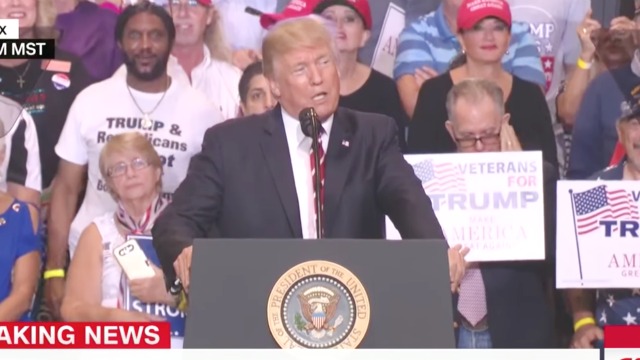 Whenever President Trump holds rallies, he loves to tout the size of the crowd. Well, a new report tonight says some pre-Phoenix rally coverage he saw last week teed him off and led to the President “punishing” a longtime aide.

The Bloomberg Politics report says before the rally, Trump saw some media coverage that “the site of his campaign rally, the Phoenix Convention Center, was less than full.”

The rally was put together by George Gigicos, a longtime aide to the President. Gigicos was actually White House Director of Scheduling and Advance up until the end of July, when he left the White House.

CNN reported at the time that Gigicos’ plan was to go back to his consulting business, but also “do work for the Trump 2020 campaign.”

He set up rallies during the campaign, and Bloomberg’s report notes that when “rally logistics weren’t perfect,” he would blame Gigicos, but “his irritation usually blew over quickly.”

However, this time was apparently different:

As his surrogates warmed up the audience, the expanse of shiny concrete eventually filled in with cheering Trump fans. But it was too late for a longtime Trump aide, George Gigicos, the former White House director of advance who had organized the event as a contractor to the Republican National Committee. Trump later had his top security aide, Keith Schiller, inform Gigicos that he’d never manage a Trump rally again, according to three people familiar with the matter.