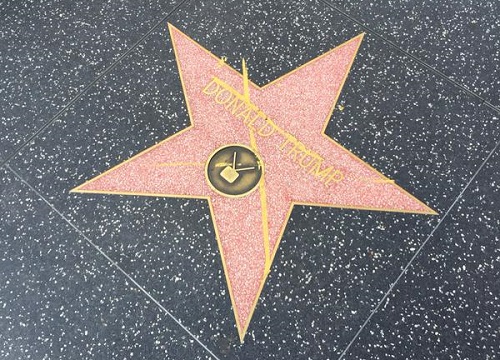 One of Donald Trump‘s supporters is getting a ton of heat on Twitter after she posted pictures of herself as she cleaned up the president’s star on the Hollywood Walk of Fame.

Ever since Trump entered the 2016 race, his honorary star was repeatedly vandalized by those looking to protest his incendiary politics. At one point, the former reality showman’s star had to be replaced after a man disguised himself as a construction worker and smashed it with a pickax and sledge hammer.

Makenna Greenwald arrived on Hollywood Boulevard several days ago, and she released these pictures from her time there:

Stopped to clean @realDonaldTrump Hollywood Star. Nothing but respect for MY President. #RaisedRight pic.twitter.com/jL4sqx4rlh

Pro-Trump figures retweeted Greenwald with clear approval of her showing respect for the president.

This is how Democrats are treating the girl who cleaned graffiti off Trump's Hollywood star. Appalling pic.twitter.com/ieEB9eyemD

Two Americas – which will you choose? pic.twitter.com/5UkmN15XOS

Wow. Great American. @CNN @NBCNews @JoeNBC (who calls the @POTUS a schmuck, liar, goon etc.). Watch and learn what respect for the office is https://t.co/2m8aUVlBUd

Good job! What a respectful person!!

However, not all of the reactions were quite so positive:

Thank you for your kindness towards All Americans, even the stupid ones ??????

Nice of you to stop by and pay tribute to those damn liberal Hollywood elite, ya know?

Hope that –someday — he will have respect for women! Fingers crossed.

Cool, you cleaned off his star. Idc about that. What's annoying is the fact you had someone take pics of you doing it for twitter rts lmao.

Lmao what a clown

I grew up Christian. How does this president represent the teachings of Christ? Talks of 'grabbing pussy', mocks a disabled person, POW, etc