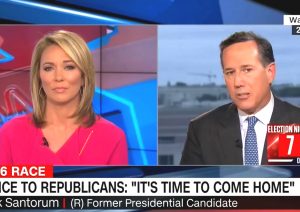 Kasich announced on Monday that he had written in Sen. John McCain for president rather than support Trump. Bush has not endorsed Trump. Sen. Lindsey Graham, another defeated candidate for the GOP nomination, has repeatedly distanced himself from Trump.

Santorum appeared to be confusing the loyalty pledge that the RNC asked candidates to sign in Sept. 2015 with the Statement of Intention of Candidacy & Party Pledge (SICPP) form required by the South Carolina Election Commission. The RNC pledge included the provision that each candidate would “endorse the 2016 Republican presidential nominee regardless of who it is” and not mount an independent run (there was debate as to whether or not the pledge was legally binding). The South Carolina SICPP form included no such provision compelling the signer to endorse, only that they would not launch a write-in campaign to compete with the nominee.