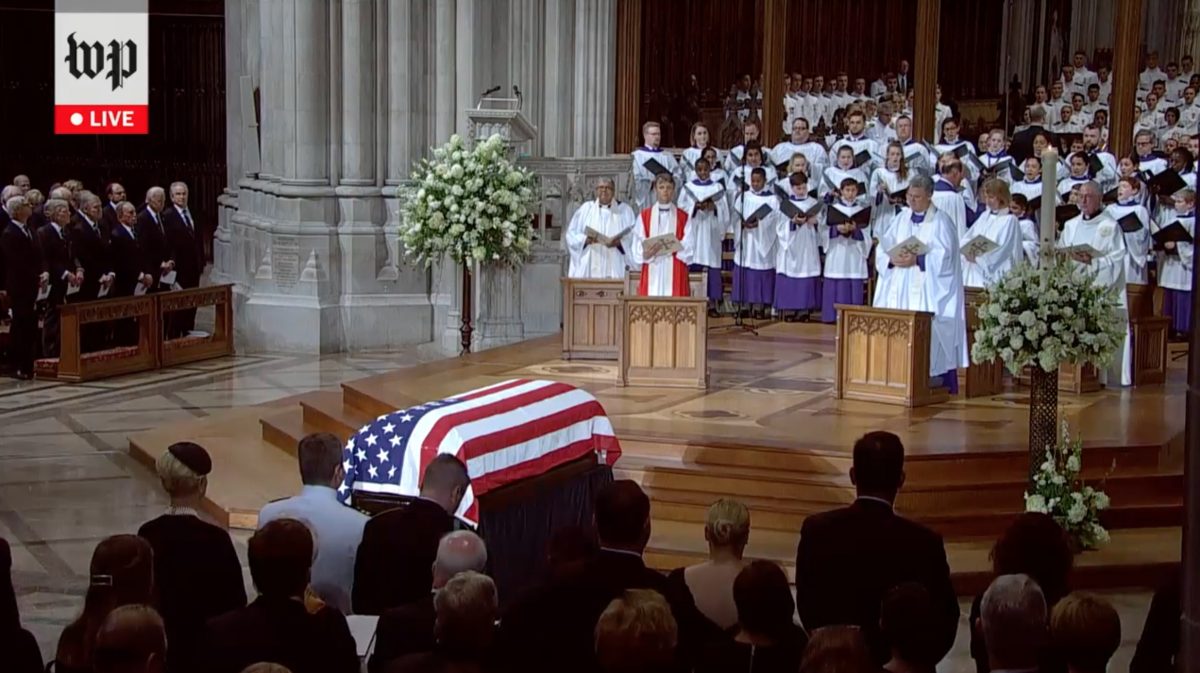 Though President Donald Trump wasn’t invited to the memorial service, and his name was never mentioned, the eulogies served as a loud rebuke of his presidency and worldview.

“The America of John McCain has no need to be made great again because America was always great,” Meghan McCain said in her powerful and tearful speech, drawing applause.

“So much of our politics can seem small and mean and petty,” Obama said. “Trafficking in bombast and insult, phony controversies and manufactured outrage. It’s a politics that pretends to be brave and tough, but is instead born of fear. John called on us to be bigger than that, to be better than that.”

Bush said McCain “detested the abuse of power and could not abide bigots and swaggering despots.”

The pointed rejection of Trumpism did not sit well with the president’s supporters. While no one currently working for the White House thought it wise to bash a senator’s funeral service and its grieving participants, many prominent Trump supporters unleashed.

Loudest perhaps was Sebastian Gorka, former deputy assistant to the president, who ripped the ceremony as “PATHETIC” and “utterly uncouth.”

Love him or hate him, he’s still their obsession. They can’t do anything without talking about him. Must suck to be that deranged and pathetic. #MAGA

They have no self-awareness. NONE. https://t.co/Xitkt8DaA9

Sadly, @MeghanMcCain seemed to do exactly what she slammed Trump for doing. What should have been reflection and celebration of a patriot’s life, has been turned into political theatrics and cheap shots. It’s embarrassing, and really disappointing. https://t.co/xVK1PxOkVf

Fox News host Mark Levin ripped the media for amplifying the memorial and calling out Trump for golfing during the service:

Another day of attacking Trump via McCain weeklong memorial with media amplification. Terrible.

What kind of dumb media coverage is this?Trump wasn’t invited to any of the McCain memorial events. And he’s being dissed repeatedly. Is Trump supposed to sit in a corner at the White House all week? This is twisted. https://t.co/a3Krh8UuPF

So, another lecture at the memorial. This time from Joe Lieberman… it was mindless partisanship to vote to repeal Obamacare? https://t.co/98UQlOfc0r

It’s too bad she can’t participate in a funeral instead of lobbing political hand grenades.

This is why Trump run. https://t.co/CKkLfsR2u2

Leftist propaganda does not work on me—even when it comes in the form of a lavish funeral. #McCainMemorial

McCain’s problem with voters, one of the least popular Senators in recent polls, lost every Presidential run, was they thought the ‘maverick’ stuff was just an act. Watching a memorial filled with swamp creatures and petty political attacks, isn’t helping fight that.

Imma just gunna go ahead and use my own father’s funeral to own the Trumptards.

The McCains are pure class. Not at all petty or small like that awful Donald Trump. https://t.co/euC6sN22Ms

Not bitter, petty, small, or prone to inappropriate grudge-holding like that awful Trump…

Dear Lord, what possible benefit to America would there be for politicians to troll Trump during a nationally televised funeral? ??