Trump Takes Credit for Eroding Public Faith in the Media 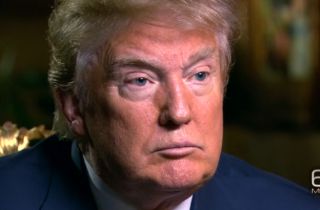 Republican presidential nominee Donald Trump says that it’s by his doing that the American people are losing trust in the press, and he’s quite proud of himself.

The real estate mogul had a radio interview with Fred Dicker on Thursday morning, in which he was asked about a new Gallup poll showing that only 32 percent of Americans say the media reports the news “fully, accurately and fairly.” The figure is an all-time low for Gallup, and they stated upon release that Trump’s regular attacks on the press might be a highly relevant factor.

“The media has openly been dishonest and I look at that poll and I said, ‘Wow.’ Because every speech I talk about it,” said Trump. “I am really proud to say that I think I had a lot to do with that poll number.”

As the discussion progressed, Trump called CNN the “Clinton News Network” and spent some time bashing their “terrible” ratings. Trump also railed against New York Times correspondent Jonathan Martin a great deal, saying that if Abe Rosenthal were still alive, he would’ve fired Martin “on the spot” for saying “horrible things” about the mogul on Twitter.

Trump’s relationship with the Fourth Estate is complicated, to say the least. The mogul regularly calls the media “dishonest” and the like, threatened to expand libel laws for suing news outlets more easily, and only recently allowed his campaign to end their media blacklist.