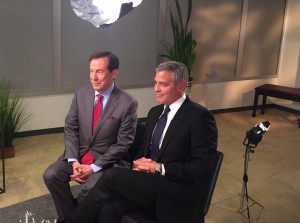 Actor George Clooney is appearing on Fox News Sunday in three days, but we have a few quotes to share to get you hyped for the big event.

You’re probably aware by now that politically, Clooney is not at all into Donald Trump and loves Hillary Clinton. He has expressed annoyance at having to defend America for being so enamored with Trump whenever he goes abroad, for instance. He isn’t the only American who is mortified by Trump’s rise, of course. Plenty of Republicans have spoken out against the reality TV star, too. Bill Kristol and George Will are two great examples.

You can imagine, then, how weird Clooney must feel agreeing with them on something. He explained it to Chris Wallace this way when asked about talking about politics and gridlock:

You know that’s a good question.  I think it’s frustrating. You know, I grew up as a Democrat in Kentucky in the 70’s, so, you know, I grew up in a place — I was a minority, you know, in that world.  I didn’t move to Hollywood and become a Democrat. But it wasn’t as contentious and there wasn’t the idea that once, one party got power that nothing was going to happen from the other side, that they were going to just stop things cold. I worry about that.  I think that’s dangerous.  It’s a very funny thing, odd for me to be on the same side of an issue as Bill Kristol and Charles Krauthammer and George Will and people like that.  And usually we’re not on the same side.

The rest of his interview is set to focus on the corruption in South Sudan and his latest venture, an organization called Sentry.com, which his partner John Prendergast described as “a private sector attempt to follow the money, to build a team of financial forensic investigators who are burrowing into these systems of corruption[.]”

Tune in to Fox News Sunday this week to see it all.