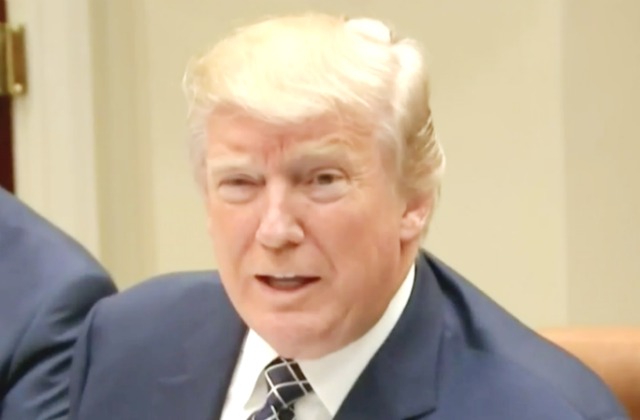 President Trump weighed in on Twitter this afternoon with his thoughts on the protests in Boston today, criticizing the “anti-police agitators”:

Looks like many anti-police agitators in Boston. Police are looking tough and smart! Thank you.

Protesters in Boston took to the streets en masse in response to a planned “Free Speech Rally” this afternoon.

There were some protesters scuffling with the police, and minutes before the President tweeted, a New York Times reporter tweeted that the police commissioner believes there were “up to 20 arrests” in the crowd of thousands.

Twitter was quick to weigh in on this latest presidential statement:

Any thoughts on the white supremacists? No? Okay. https://t.co/DKJTTPq4RF

Footage does show some clashing with police in Boston. They were far outnumbered by thousands of peaceful protesters https://t.co/zRXMI5SmCs

If you were for the rule of law, you would have talked about Charlottesville differently. https://t.co/C0p6IRuPAV

Some are Very Fine People https://t.co/KepqnkXCb3

Tough and smart, two things no one will ever accuse you of being.

Tens of thousands of people come out to protest white supremacists … and POTUS suggests they are fomenting violence https://t.co/txoyxJQpOo

Protesters against the alt-right are now “anti-police agitators” to the president, apparently.

UPDATE –– 4:35 pm ET: Trump later tweeted out this message about the protests (though “heal” is misspelled):

Our great country has been divided for decades. Sometimes you need protest in order to heel, & we will heel, & be stronger than ever before!

UPDATE –– 4:52 pm ET: That above tweet was taken down and replaced with one that spelled “heal” correctly, and the President also tweeted praise for protesters “speaking out against bigotry and hate.”