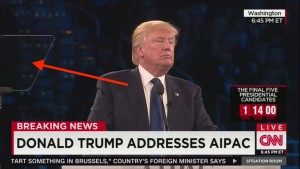 It may look easy, but reading a teleprompter and doing it well is one of the tougher things to pull off as a TV anchor/host or politician. The reading part is fairly simple, sure… but making it appear like you’re not reading at all? Well, more than a few in the business can’t pull it off.

Keith Olbermann — love him or hate him — is tremendous in prompter, probably the best. Shep Smith is flawless, as is Bret Baier. Brian Williams is arguably the most natural. John Berman has that same big network gravitas and presence. Big fan of Kennedy’s style and expression… she knows how to make whatever she’s reading more compelling. Ditto on that front with Rachel Maddow. And if we’re including fake newsmen, John Oliver blows away everyone else in this space with unmatched energy and conviction.

What do all of these folks have in common?

You can’t tell they’re in prompter.

All of that said, it was refreshing to see Donald Trump finally embrace the wonders of prepared remarks during Monday’s AIPAC speech. Fans of Trump’s speaking style will tell you that part of the attraction to his candidacy is his unfiltered, unapologetic, unprepared speeches. Yes, they may go off on rudderless tangents and sometimes get him trouble (a relative term when it comes to the GOP frontrunner). But it’s that authenticity and passion that comes from the heart instead of the head that has helped fuel his rise to the top of the Republican field. And it will make for one hell of a contrast if the general ends up being the scripted and halting Hillary Clinton vs. the freewheeling-on-the-stump Trump.

But before Trump goes back on the trail, he should sit down and watch his AIPAC speech again… because it was excellent if we’re strictly analyzing delivery and presence. The difference-maker? A teleprompter to keep the freight train in Trump from running off the tracks. Result? The 69-year-old came across as tempered, focused, authoritative and downright presidential. That doesn’t mean, of course, that Trump was totally scripted, as he went off-prompter (some call it self-editing) when it seemed he felt he was sounding too much like a canned politician.

Team Trump released his remarks before the speech (normally not possible), which allowed me to see what was in prompter and what Trump added along the way. Examples:

“Every single day, you have rampant incitement and children being taught to hate Israel and to hate the Jews,” Trump said. He went off-prompter, paused, then added: “It has to stop.”

Another short pause. He then went off the cuff again to drive the point home: “We can’t let this happen any longer.”

This was a recurring theme throughout the speech, and it worked because of Trump’s short pausing for effect, emphasis and inflection at the right moments. Oftentimes the off-prompter remark consisted of the same two words: “Believe me.” By my count in foolishly playing the Trump Tecate Drinking Game during the speech (cave fridge was out of Schlitz), I ended up feeling a bit dehydrated this morning after 12 sizable swigs following every utterance — an even dozen in 25 minutes — of “believe me”. Milk would have been a better choice…

Overall, as the Wall Street Journal put it, the unconventional Trump gave a conventional political speech. The grade here is an A- for his ability to read naturally while still looking and sounding unrehearsed.

He’s done enough television before his candidacy to understand what works and how to sell it, scripted or otherwise.

Trump’s brand is unfiltered authenticity in playing the role of the anti-politician. That’s understood.

But if watching yesterday’s speech again is on his itinerary, Trump should be street-smart enough to realize that there is room for a teleprompter moving forward… if convincing those undecided he has the gravitas, the right pitch and tone, for the highest office in the land.