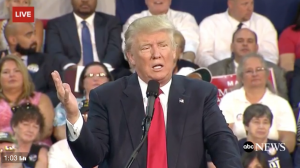 As we all know by now, there are a lot of negative things to say about Donald Trump. However, no one can deny that he is a master manipulator of the news media. He might even be very best there ever was (even better than President Obama, which is just amazing). His speech Wednesday night on illegal immigration was a classic example of why this is and might be the most dramatic of example of the entire campaign.

If two weeks ago I told you that Trump would get well over an hour of uninterrupted primetime (along with hours of coverage on either side of the speech) on every cable channel to simply discuss his immigration policy, you would have more likely believed that Sean Hannity had unendorsed him. But that is exactly what happened, and the result was almost the equivalent of Trump getting a second chance to give his convention speech, all at the exact moment when the race appears to be tightening.

Trump pulling this off (in a world where the news media is supposedly dead set against him) is so remarkable that a large part of me thinks that it had to happen by pure luck or accident. After all, while Trump is a savant when it comes to playing the media like a fiddle, he’s also not that bright and there is so much chaos in his campaign that it is hard to believe this could have all been part of a highly-coordinated plan.

Regardless, the whole reason that this speech got so much hype and coverage is that for much of the last two weeks the Trump campaign has been sending out obvious trial balloons that it was planning a major “softening” of the very stance which allowed him to steal the GOP nomination. This even resulted in Rush Limbaugh being forced to admit that he never really believed Trump on much of his plan (thanks for letting us know that now, Rush!) and former GOP congressman Joe Scarborough putting out a hilarious music video based on the hashtag #AmnestyDon.

All of this speculation created two things that the news media loves: drama and mystery. Is Trump going soft? What is his real plan? Will Ann Coulter still support him, or will she have to burn her new book?

If the Trump campaign had hinted at a change in any other position (other than maybe that of Melania as his primary wife) it would have been a minor news story. However, this was the very heart of who Trump supposedly was (despite numerous fairly recent statements indicating he’s actually quite liberal on the topic of immigration and open borders) and therefore a potential major shift was seen as a very big deal, especially in the late summer lull of the campaign.

Then Trump added fuel to the intrigue while adding perceived gravitas to the drama and mystery (a media trifecta!) by accepting an invitation to visit with the president of Mexico in Mexico City. Now the news media had an excuse for over-covering all of this all day long because they could claim that it had the gravity of important international relations.

While there, Trump benefitted from remarkably low expectations and incredible hypocrisy from his biggest cheerleaders. Because he was able to mumble through some prepared remarks and answer a couple of quick questions (where he may have fibbed about whether Mexico paying for Trumps’s wall was discussed) without insulting a foreign leader and while apparently controlling his bodily functions, he was suddenly “presidential.” Watching a seemingly castrated Trump in front of the leader of the nation he got nominated largely by demeaning was quite something. A remotely similar performance would have caused Trump’s most ardent fans to severely condemn Marco Rubio, for instance, if he had taken part in such a propaganda event in Mexico, but there was no such visible reaction to Trump’s beta male act.

When Trump retuned to the United States, he apparently also was able to access his testicles which seemingly had been taken by U.S. Customs. By nighttime he was a completely different person, with the bizarre presence of “Make Mexico Great Again Also” hats at his Arizona rally being about the only remnant of the morning’s détente with our southern neighbor.

The actual speech was fascinating because Trump and his speechwriter did an amazing job of creating the appearance of absolutely no “softening” of his plans, but while actually taking out a critical piece of his prior equation. Trump found a way to somehow have both Ann Coulter and Sean Hannity lavishly praise the announcement that he had blatantly lied during the primaries about intending to deport all of our illegal immigrants.

That is just a flat-out remarkable achievement. It was like watching a guy convince his wife that only lying to her about SOME of the most important elements of their relationship was something that she should celebrate. At one level it was nauseating, and on another I just had to respect the audacity and genius of it.

Speaking of audacious, Trump not only revealed he lied about the mass deportations he promised in the primaries (in a way no one would really notice much) but he also went on longer than most State of the Union addresses, went off topic many times in an overtly political fashion, railed against people who violate their visas (what about Melania?!) and even got away with using the family members of those killed by illegal immigrants as props, all while the TV networks never even budged. There is no other person identified as a Republican who could have possibly gotten away with all of that.

Heck, if even President Obama said he was going to give a speech in primetime on illegal immigration and made it clear that it would be overtly political in nature, I don’t think that the networks would give it more than a few minutes of live coverage. That’s how good Trump is at manipulating the news media, largely because they know he is great for ratings while providing entertaining/easy content, and he understands their weaknesses.

The bottom line reality is that, even if Trump somehow gets elected, there is never going to be a beautiful wall, and Mexico is never going to be forced to pay for it. The great irony is that if president Trump suddenly decides based on the wind direction one day that he wants some sort of “amnesty,” he would have a FAR greater chance of getting that passed through congress than Hillary Clinton would because Republicans wouldn’t be able to buck him on it in large numbers (as long as they called it something other than “amnesty,” which would be easy enough to do).

So the Trump “con” continues, just in a slightly different fashion than most people (including myself) expected. What, if anything, this will do to the trajectory to the race is unknowable at the moment (he’ll probably get a small polling bump). What is known however is that, at least while he is perceived as still being behind, the news media is more than willing to let themselves be played by Trump. As a conservative who has forever longed for a Republican candidate who processed this incredible talent, it is particularly frustrating that when it finally happens it is in a year when we got duped into nominating an unqualified Democrat.