Trump’s Speech to Congress Killed Conservatism But, at Least for Now, Saved His Presidency 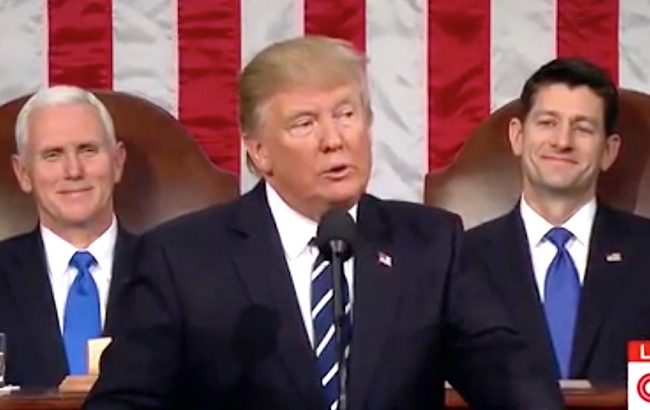 Who the heck was that guy who gave a speech to a joint session of Congress Tuesday night? It sure looked like Donald Trump, but other than that, there wasn’t much evidence that it was the same person who has dominated our national consciousness for over a year and a half.

In fact, if everything else was exactly the same, but Trump identified himself as a Democrat and acted like the man who gave that speech all of the time, I would have whole-heartedly endorsed him in his race against Hillary Clinton. I might even have been a little excited about it.

Under that scenario, he would be, by far, the best Democrat on the issues possible, though Republican majorities in Congress would not feel compelled to go along with all of his ample big-government fantasies. Also, we would not have massive increases in government spending and power instituted under a ‘Republican’ president, thus ending, for all time, any chance that we ever return to Reagan-like principles of smaller government before we inevitably suffer a financial implosion under the weight of massive debt.

For the first time since taking office, Trump was, for him, remarkably disciplined and, yes, really rather ‘presidential.’ Ironically, that was mostly because he stuck strictly to the very same teleprompter which he has roundly mocked Barack Obama for relying on too much.

While he is no Obama when it comes to his mastery of reading skills, he benefits from such incredibly low expectations that him simply not having a Ron Burgundy-like Anchorman meltdown makes him seem like Brian Williams in his prime. There were no moments of extreme egotism (at least by his standards), no attacks on the media or even Hillary, and no overtly apparent bald-faced lies. He didn’t even say anything nice about his BFF Vladimir Putin.

He hit on all the major points that got him elected (even while shifting his positions on some of them) and laid out a populist agenda, which had to sound real good to a lot of ‘regular’ people who haven’t already completely written him off. He even hit an extraordinary emotional note with his strong and comforting words for the teary-eyed widow of a fallen Navy SEAL whose death some (including the soldier’s father) have been implying was his fault.

While conventional media wisdom is usually wrong, there is no doubt that, just as the pundits have universally suggested, this speech will help Trump’s political standing. It will, also, give him the opportunity to reset a presidency that has been off to an extremely unsteady and troubling start. Whether he will be capable of taking advantage of this chance once he’s off the teleprompter (and not in a hugely dramatic setting) is obviously unknowable.

As a conservative, I really only had two problems with the speech. The first is that, other than on defense, taxes, and immigration (maybe), most of the speech was filled with extremely liberal concepts and proposals.

One of the most amusing and disorienting elements of the address was watching former budget hawk Paul Ryan constantly stand up behind the president and applaud for ideas which, if they had come from Hillary Clinton, he would have reacted to by sitting on his hands with a frown. How government-mandated maternity leave, a trillion-dollar infrastructure program, keeping government very much in the healthcare business, highly restrictive trade policies, or big deficits are suddenly even remotely ‘conservative’ (or even ‘Republican’) is a ‘Bruce Jenner-is-now-a-woman’ level mystery to me.

But it’s not just Trump’s specific big-government proposals that should be troubling for the 58 or so real conservatives left in America. The entire tone of the speech was one that felt like it was written from a liberal perspective, in that greater government involvement was the foundational answer for nearly every problem. I honestly believe that if Obama had spoken exactly the same words, sans some of the military/immigration red meat, that Trump’s biggest fans would have HATED it.

The second thing about the speech that bothered me was just how different Trump’s performance was from the person we have seen almost every day for since late 2015. This was far beyond simply his toning it down, or a softening the sharp edges, for a prestigious event. His transformation was the stuff of some sort of multiple personality disorder.

Trump likes to brag that he is “very capable of changing into anything I want to change to,” but this kind of dramatic chameleon-like alteration was as jarring as if Kayne West held a concert and decided to only play the piano and sing love ballads. People would question if he was okay, or if he had recently been prescribed some serious medication. Obviously, since Trump is our president the stakes are exponentially higher — seeing him as such a different person was both comforting and disturbing at the same time.

As the father of a strong-willed and not very well behaved four-year-old, it all felt very much like when she is suddenly really good for a whole day. Part of me is rejoicing at the potential for the future, but most of me is bracing for horrors that the next morning are likely to bring.

Is it possible that, just as the chattering class is currently speculating, this is indeed the beginning of a new Trump presidency with enormous upside potential politically? Yes, it is. But, if history is any guide, the more likely scenario is that we will look back on this night as mostly an aberration and a sign of what might have been.

— —
John Ziegler hosts a weekly podcast focusing on news media issues and is a documentary filmmaker. You can follow him on Twitter at @ZigManFreud or email him at johnz@mediaite.com.
— —