Trump’s Threats to Conservatives on Healthcare Should Not Be Taken Seriously, Unless…
Opinion

Trump’s Threats to Conservatives on Healthcare Should Not Be Taken Seriously, Unless… 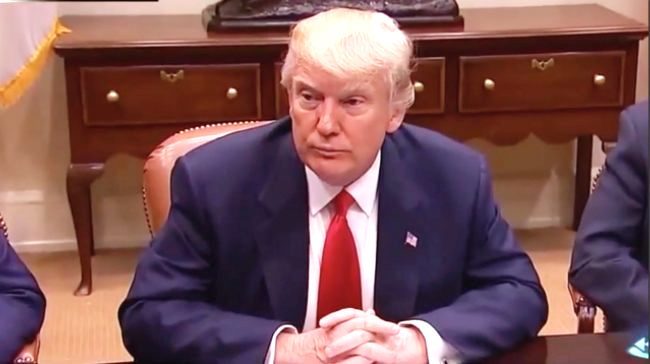 Emblematic of how completely messed up our entire society is, we have a president whose only marginal qualification for the job is as a real estate investor, and he’s decided that his first major legislative push should be revamping our entire healthcare system. Don’t worry though, his understanding of the issue is so comprehensive that he recently declared that “nobody knew that healthcare could be so complicated.”

After the roll out of “Trumpcare” (please don’t call it that, our president doesn’t like his name attached to things) went about as well as the so-called “Muslim travel ban,” it appears that the proposal may not even get out of the GOP controlled House of Representatives and is doomed if it makes it to the Senate. In response, Trump has already floated a couple of different strategies for how to deal with this problem.

One option apparently is to just let Obamacare fail and let the Democrats take the blame for it. While a horrible idea for “Making America Great Again,” politically this might have been the best option. However, now that he has already dived head-first into the same slimy swamp from which many politicians have never fully gotten clean, it appears that it is far too late for this strategy, especially since Democrats currently control little else in Washington other than most of its major media outlets and academic institutions.

Another tactic is to portray the original bill as just the start of a “big, fat, beautiful negotiation.” But this is in direct contradiction to what House Speaker Paul Ryan has said and sure sounds like a recipe for something even more convoluted/inefficient than what is being proposed (and maybe even worse than what we already have).

As for Ryan, there already seems to be an organized effort to undermine him, as Trump’s favorite website Breitbart (or is that InfoWars?) has been overtly attacking the Speaker on the healthcare bill as if Trump is simply an innocent bystander with no say in the matter. They even released audio last night of Ryan privately ripping Trump during his lowest point in the campaign.

However, my favorite strategy floated by Trump is that he is threatening to ‘primary’ any GOP congressman who fails to get in line for the bill, to which he doesn’t even want his named attached. This warning is so classically delusional, even for Trump, that it is flat-out funny.

On paper, I can see how Trump fell for the idea that he would have the power to pull this off. Most of the opposition to the bill in the GOP House comes from strong conservatives in districts where Trump won by large margins. However, this is clearly a situation where actually implementing his threat would be next to impossible.

First, the congressional primaries are well over a year away. Second, there is no fervor for a bill that doesn’t really strongly appeal to anyone. Third, who are these remotely-qualified “Trump super fan” primary opponents Trump is going to find to take on incumbent conservatives (unemployed middle-aged white guys wearing red “MAGA” hats?) and who is going to fund their campaigns? Fourth, why would conservative primary voters oust a conservative, most of whom have already voted numerous times to repeal Obamacare, because they didn’t support a bill that wasn’t seen as conservative?

The reality is that, while there is no doubt that Trump leads a “movement” and has a cult following that makes up about a third of the GOP who would do anything he told them to, his ‘magic’ is not transferable to a normal person. Trump’s appeal is not in his philosophy (whatever that is), but rather in his celebrity and perceived wealth. You take away that and, without the corresponding cameras and crowds, he just seems like a lost carnival barker, which is exactly what these ‘Mini Trump’ candidates would look like.

Making this threat even more obviously hollow is that it has effectively already been tested and revealed to be completely impotent. Last year, after it was clear Trump was the GOP nominee, a Trump fan backed by Sarah Palin, Ann Coulter, and Matt Drudge (and, until the very end, somewhat supported by Trump himself) ‘primaried’ Ryan himself and lost in an 84-16 nail-biter.

It appears that some close to Trump are already seeing the folly of this fake rattling of his tiny saber. Trump friend Christopher Ruddy (who, weirdly, recently donated one million dollars to the supposedly evil Clinton Foundation) has written suggesting that the president should abandon the conservatives in Congress and focus on the moderates. However, the GOP moderates are already with him on this and, if any Democratic moderates still exist, they aren’t likely to be moved by Trump who is toxic in liberal circles and has an overall approval rating in the 40s. (Democrats who vote to kill Obamacare WILL be effectively ‘primaried’ next year.)

Trump’s fundamental problem here is that he is trying to solve an equation which likely has no answer, and he is poorly suited to even try. Unfortunately, you can’t get rid of Obamacare (especially now that it has shifted in the public consciousness from a privilege to a right) without causing enormous damage, both politically and policy-wise, at least in the short run. You also can’t create a ‘conservative’ alternative which relies heavily on government to apply a tunicate so that the transition away from Obamacare isn’t catastrophic.

In short, Trump is the kid who has never tried the Rubik’s Cube before and he’s decided to attempt solving one which is missing several of the panels and therefore has no solution. This conundrum was very well articulated by conservative CNN commentator Matt Lewis in my podcast discussion with him this week.

The scariest part of all this for conservatives is that Trump’s only politically viable option may be to go with what he has already implied he’s philosophically inclined to (but which nearly everyone pretended he didn’t say), which is to replace Obamacare with MORE government intervention and some sort of socialistic single-payer system. This result would be completely in keeping with the tendency for nearly everything in this bizarre era to turn out in the opposite way that was intended or expected.