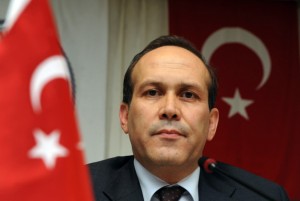 Turkish Ambassador to the United States Namik Tan hit back at Texas Governor Rick Perry after his remarks that spurred an international incident during last night’s Republican debate where he called the country “ruled by what many would perceive to be Islamic terrorists” and suggested the country be kicked out of NATO and its foreign aid be eliminated.

“I am disappointed and concerned that Turkey and its time-tested ties of alliance, partnership and friendship with the United States became the object of misplaced and ill-advised criticism during last night’s Republican candidates’ debate,” Tan wrote in a statement. “Needless to say, the Turkey described in the debate simply does not exist.”

“Turkey is a secular democracy that has for decades been an essential and trusted partner of the U.S. Our bilateral relations are based on the common values of democracy and respect for human rights, rule of law, and free market economy. Whether in the fight against terrorism or violent extremism, in Afghanistan, Iraq and Syria or against the proliferation of WMD, we stand side by side to tackle the many common threats and challenges of our times. Through NATO and bilaterally, Turkey and the U.S. will continue to cooperate day in day out to establish peace, security and prosperity around the world. Contrary to statements during the debate, Turkey receives no significant sums of foreign aid dollars from the U.S. Indeed, Turkey is a strong and growing trading partner with the U.S. in general, and with Texas in particular creating thousands of jobs throughout that state.

Turkey is obviously not the same country that Governor Perry visited in the 1970s. As an accession country to the European Union and a founding member of the Council of Europe, Turkey has been continuously reviewing and enhancing the rights of all its citizens irrespective of their ethnic or religious background. Moreover, Turkey is now the 16th largest economy in the world, and the 6th biggest economy in Europe enjoying one of the most robust growth rates in its region and beyond. Its democratic standards, its economic strength, and its secular nature make Turkey an inspiration at a time when the Middle East and North Africa are undergoing a major transformation.

“While it was unfortunate, we do hope this episode in last night’s debate leads to a better informed foreign policy discussion among the Republican Party candidates, one where long-standing allies are treated with respect not disdain.”

UPDATE: In addition the Turkish ambassador’s statement, the State Department strongly condemned Perry’s remarks as well. “We absolutely and fundamentally disagree with that assertion,” declared State Department spokesman Mark Toner. “Rest assured that we believe that Turkey is a stalwart ally…Turkey is one of the oldest members of NATO.”