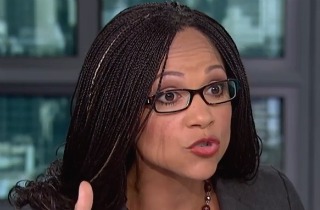 Harris-Perry told a guest to be “super careful when we use the language ‘hard worker.’ Because I actually keep an image of folks working in cotton fields on my office wall, because it is a reminder about what hard work looks like.”

But Wemple found many examples of her using the term herself:

Wemple also noted several times that guests have used the term in front of Harris-Perry without facing her wrath, and one instance in which she played video of Hillary Clinton using the term without commenting on it.