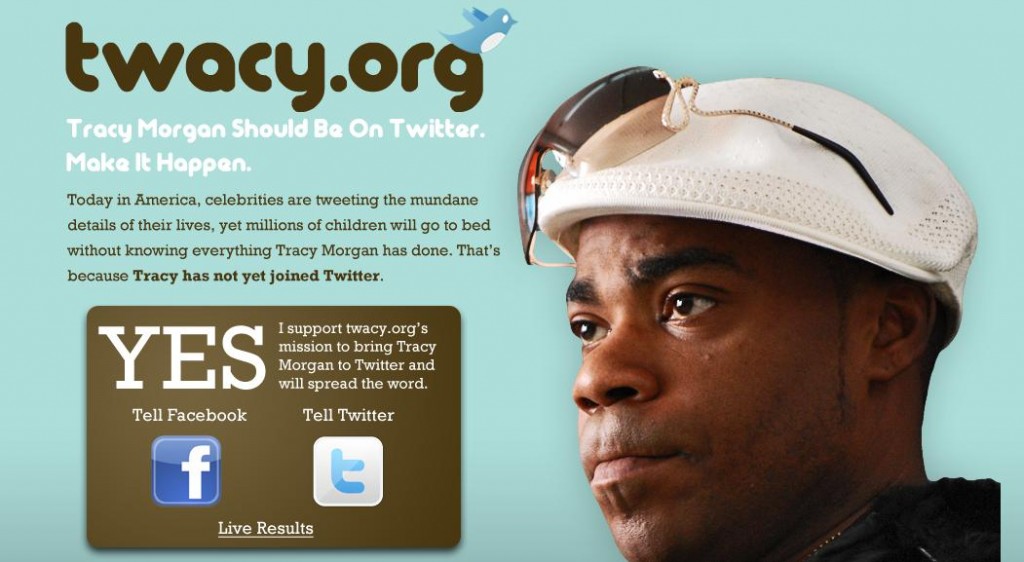 Twitter is a place for many things: Breaking news, political movements, movie reviews, transparent flirting, sardonic cats. But for all the voices on Twitter bleating for attention, famous and un, one remains silent: Tracy Morgan.

Celeb-tracking website OMGICU — as in, “OMG, I see you, and I’m going to tell this website where you are!” — wants to change that. They’ve actually made it quite an issue, creating a web page and making a video featuring OMGICU founder Hugh Dornbush (below, and yes, that’s his real name, not the name of his first pet and the street he grew up on). Dornbush and OMGICU unveiled the concept last night at the always-well-attended New York Tech Meetup, and today they have launched, sending the call out to Twitter for pickup via influencers in the tech scene. It’s how grassroots is done these days (especially when you’re repped by a social media-savvy PR company like Attention, which sent Twacy.org our way this morning) (and yes, it IS a dot-org. Nice touch, that). 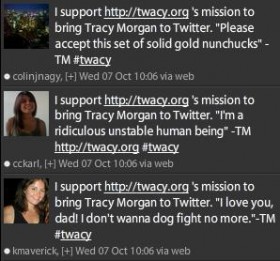 It’s not a hard sell though — Tracy Morgan is hilarious, and does seem to have that perfect lack of a filter to make him a delight on Twitter. The tweets themselves are eminently retweetable:

@OmieNice: “Where are the french fries I did not ask for? You guys need to anticipate me!” Bring Tracy Morgan to Twitter. http://twacy.org #twacy

@ovelocityo: Bring Tracy Morgan to Twitter. http://twacy.org “Tell her that you want her privates and your privates to do a high five.” -TM #twacy

@shelbyhot97: Bring Tracy Morgan to Twitter. http://twacy.org “I may hug people too hard and get lost at malls, but I’m not an idiot” –TM #twacy @omgicu

@whizhouse: “Have we lost our moral center? It just makes me want to pee on someone.” Bring Tracy Morgan to Twitter. http://twacy.org #twacy @omgicu

Etc. etc. If they seem neatly pre-programmed to you, it’s because these kids know what they’re doing — I specifically asked if Dornbush and OMGICU had sent their pals pre-written tweets to send out, and they in fact did not. Apparently they knew that there were enough Tracy Morgan quotes out there to galvanize the troops on their own. It takes a village.

Will this get Morgan on Twitter? Who knows. What it is doing in the meantime is (a) getting buzz for OMGICU, which seems the purpose of the campaign (I mean, aside from bringing the voice of Tracy Morgan to the masses) and (b) Showing that 30 Rock Twitter feed how it’s done. If you don’t believe me, check out the #twacy hashtag. At this rate, it won’t be long before it’s twending.