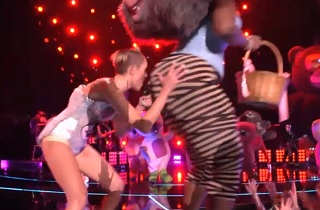 Although I spent my Sunday night watching Dexter, Breaking Bad, and The Newsroom (in that order, because eff you, commercials), it has come to my attention that pop singer Miley Cyrus did something horrible that requires the kind of analysis which can only be provided by someone with only casual knowledge of the subject matter. Cyrus’ performance at Sunday’s MTV Video Music Awards seems to have sparked universal agreement that it was very, very bad, but sparked intense debate over why it was very, very bad.

Let’s deal with the first layer of this onion right off the bat: whatever you think of Miley’s performance, it is perfectly reasonable for her contemporaries, music and social critics, and people otherwise possessed of some form of expertise or standing to weigh in on what was obviously a controversial performance. What doesn’t seem reasonable is the blistering pace of old-ass white people on news shows holding forth on something they obviously know, or care, little about every other day of the year. It’s like listening to golf announcers call a boxing match. We’re on day two of that. I would, however, like to congratulate the conservative media for not asking why President Obama hasn’t condemned the performance. Yet.

But since there are so many uninformed middle-aged opinions out there, it only seemed fair that someone from that age group, with a casual affinity for Miley Cyrus, weigh in. “Party in the USA,” I am not ashamed to say, is one of my hundred or so favorite songs, and my son made me watch the WTF  “We Can’t Stop” video a few months ago, so those are my qualifications. I’ll take my chances against Bob Beckel on that score.

In case you missed it, like I did, here is the video of Miley’s performance, from MTV:

Much of the commentary around this performance has centered around the alleged twerking being done by Miley Cyrus, but I watched carefully, and I didn’t see anything that could be classified as a successful twerk. Admittedly, I don’t get out to the club as often as I also never used to, but I think I know twerking when I see it, and this wasn’t it. Calling that “twerking” is like watching a guy read a weather report, and calling it rapping. Okay, bad example.

Also, is it just me, or did Miley have that big foam hand on backwards? The nail-polished fingers are folded over on the back of her hand, which would be agonizing in real life, and could explain a lot about the performance. Details matter.

But the most fascinating debate over Miley’s performance has been over whether it crossed the line from cultural appropriation to minstrelsy, or whether holding such an opinion is embarrassing. In the former camp is Vulture‘s Jody Rosen, with Mediaite‘s Noah Rothman in the latter. Rosen wrote a column accusing Miley Cyrus of “minstrelsy,” while Noah wrote a column with which I disagree almost completely, but which also had one of the great closing lines I’ve read in awhile: “Sometimes a cigar really is just a cigar and twerk is just a twerk,” and if you’re not thinking “the fundamental thing apply,” then you need to watch Casablanca (everyone should do this anyway) and have a good laugh.

Rosen and Rothman took to Twitter to hash things out, a conversation which I recommend you read, but my personal favorite part of it was this exchange between This Week In Blackness‘ Elon James White and a Steven Wright-channeling Noah:

Noah Rothman: @elonjames @Mediaite not in that order, no.

Rather than attempting to rebut either of their arguments, or any of the various criticisms of them, I’d like to offer my two cents on why it is that these folks seem to be talking past each other, and maybe at the end, we can all form a circle and sing “Kum Ba Yah” in a campfire-style round, or maybe that hippie Coke jingle.

On contentious topics like race, there are certain red capes that get waved, and can cause people to react differently than they would without them, and in Noah’s case, I think that red cape was the word “racism,” as in Rosen’s declaration that Miley’s act “tipped over into what we may as well just call racism.”

For many of us, the word racism doesn’t necessarily imply an intentional act, and in fact, it is the unintentionality of certain racially insensitive or oppressive acts that makes them so insidious. For example, New York City Mayor Mike Bloomberg truly believes it is racist not to violate the rights of millions of innocent black and Hispanic people, which makes it much harder to convince him to stop. On the other hand, by this definition, I could easily identify the absurd disparity between coverage of Stop and Frisk and the NSA phone records collection as “racist,” but have chosen not to so as not to obscure the substance of my message.

For conservatives, though, “racism” is a word that triggers visions of Bull Connor and burning crosses, and an unforgivable sin that must be defended against. While the reasonableness of this can be debated, such reactions are rooted in things like the fact that I don’t call MSNBC “racist” for covering the NSA 6 times more than Stop and frisk, and yet have no problem with that accusation being leveled against Fox News for failing to sufficiently laud the heroic Antoinette Tuff. There’s a valid reason for that which I won’t go into here, but suffice it to say that if Rosen had phrased his critique less provocatively, it might not have drawn such a reaction.

If he had, instead, begun by pointing out that Miley’s act springs from a long history of white appropriation of black culture, I don’t think anyone would argue with that. Even Ted Nugent would just shrug and say “You’re welcome.” The event in question took place on a network that was a decade late to rap music, and only deigned to begin playing it when Run DMC did a duet with Aerosmith. Cyrus’ dance segued into a duet with Robin Thicke, whose “Blurred Lines” sounds so much like “Got to Give it Up” that you almost get the feeling Thicke should sue Marvin Gaye. Together, they’re like a reverse-evolutionary chart between homage and appropriation. Surely, we can all agree on this.

I don’t think Miley Cyrus’ intent was racist, and in my opinion as a casual observer, I don’t think it is motivated by the careerist calculation that Rosen accuses her of. To me, it looks like Miley Cyrus sincerely wants to be a part of the music and culture she loves, and is just not pulling it off. You have to know when you’ve reached your comfortable level of being down, and Miley clearly overshot that mark, but the accusation of a careerist motive ignores the fact that Miley ran the serious risk of alienating a huge and already-profitable fan base. The self-consciously quirky and “edgy” “We Can’t Stop” video was a clear, bold message that the old Miley, the one who was already selling millions, was gone. It was supposed to be “Dylan goes electric,” but ended up more like “Garth Brooks goes Chris Gaines.”

However, like The Office‘s Michael Scott reciting his favorite Chris Rock routine, Miley’s clear affection for black culture doesn’t translate sometimes, like in the “We Can’t Stop” video, and on Sunday night. Here’s where the red cape comes in again, because while Rosen could easily have described the act in less provocative terms, his choice of words was not mere provocation, but a reaction to provocation. This is just a guess, but I think I know where Miley tipped over, from just trying too damn hard to something racially offensive. Thanks to MTV’s innovative GIF This feature, you can watch that moment over and over again, even if I can’t figure out how to embed it for you here.

Without that particular flourish, we might still be talking about Miley Cyrus the appropriator, and/or the unnatural, unappealing raunchiness of her performance, but I don’t think we’d be talking about racism. It’s a good talk to have, though, if we listen to each other, and a hell of a lot more edifying than listening to old white people talk about how these kids today, with their music, when they should be talking about the news.