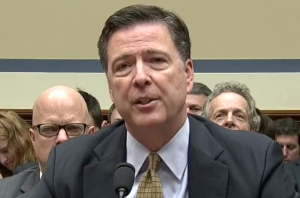 Immediately after breaking news hit that FBI director James Comey wasn’t changing any conclusions when it came to Hillary Clinton‘s use of a private email server, essentially stating that nothing will come from the previous letter he sent last month, Twitter went absolutely berserk.

Considering the partisan nature of the story, and it coming just two days before the presidential election, it all depended on who was sending the tweet on what kind of reaction you’d see.

We had the acknowledgement of how Democrats and Republican would immediately shift allegiances and their views of Comey.

Now Ds who were savaging Comey a few days ago will praise him & GOPers who were behind him will turn on him again. https://t.co/WGsT8fp1rf

*the sound of everyone switching sides on comey again*

The anticipation of how Donald Trump and his campaign would react.

CNN’s Jim Acosta reminded us all how much Trump praised Comey after the first letter.

Trump last Monday: "It took guts for Director Comey to make the move he made… What he did, he brought back his reputation."

And there was a little humor regarding last night’s Reno rally.

Then we got journalists weighing in.

Ive said, given chaos Comey created, he better be able to indict Clinton. Now he says "never mind." I dont curse on this feed, but fuck 'im.

-my father, on Comey’s 2nd letter

FBI really handled this one well

Okay Trump and Clinton, back to your default positions on Comey…

Thought neighbor stole my wrench. So I wrote a letter to all the neighbors letting them know i was investigating.

But nm, he totes didn’t.

And just in case you wanted to know how Trump surrogate Newt Gingrich felt.

Comey must be under enormous political pressure to cave like this and announce something he cant possibly know.

.@KellyannePolls on MSNBC on Comey: "He's mishandled this investigation from the very beginning."

She previously gave her thoughts on the development with this tweet:

Then why did you, your colleagues, and your candidate attack Comey and his credibility? https://t.co/GjPeV8pWsr

RNC reaction to news FBI is not changing its conclusions after reviewing newly-discovered Clinton emails: pic.twitter.com/W2OjssAPkg

Now 2 days b4 Election Day he cleans it up.

Crooked Hillary, what did you offer to Crooked Comey? American public no longer trusts FBI. What a legacy for Crooked Comey.

Fox News host and frequent Trump booster Sean Hannity also got in on this:

If law enforcement or congress ever ask for e mails regarding an investigation, the FBI now says it's OK to delete them with "Bleach Bit"

As for #NeverTrumper Bill Kristol:

Am I the only person in America (or at least on Twitter) who thinks each of Comey's three decisions (or announcements) is defensible?

Kind of just as big a surprise as last arguably inappropriate disclosure https://t.co/XxZAGWjVxX