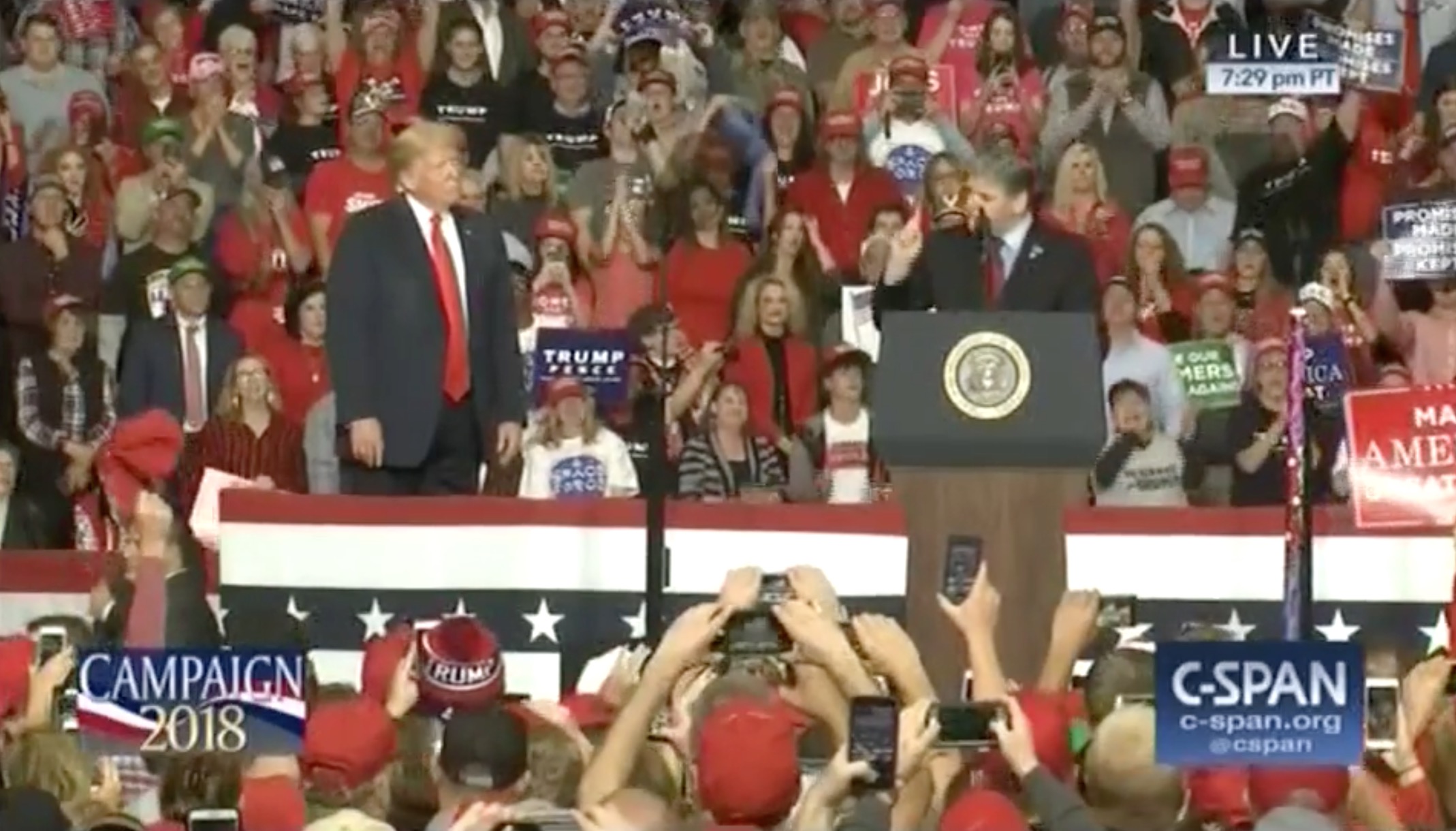 Political observers and various media figures are not impressed with how Sean Hannity and Jeanine Pirro blatantly stumped for Donald Trump ahead of the midterm elections.

The two Fox hosts held a show at the president’s final event to rally the GOP on Monday night, and they both ended up going on stage to deliver gushing support for Trump as they urged people to go out and vote. This came after Hannity insisted that he would interview the president back stage and hold a live show from the venue, but wouldn’t actually get on stage to campaign on the president’s behalf.

People took notice of the fact that Trump had two major cable news figures singing his praises, and not all of them were particularly happy about it. As you can see, many reactors felt that Hannity and Pirro pretty much solidified the White House-Fox News connection, and otherwise, they found it ironic that Hannity attacked the “fake news” on stage after putting out fake news of his own.

And at 9:30 p.m. here in Cape Girardeau, President Trump calls Hannity on stage. The first words out of his mouth are “fake news” – as he points to the press in the back of the arena. If anything is fake, it would be this tweet Sean sent out earlier today. Fake tweet? https://t.co/hZYcPCwDtI

Still can’t get over Hannity denying he would be on stage the whole day, getting brought up by Trump, and then pointing to actual news reporters and calling them fake. https://t.co/DZTVw0FWqY

Trying to imagine Hannity’s month-long meltdown if Obama ever invited Don Lemon on stage to have him insult other networks pic.twitter.com/dJy4hr2N9j

Has Hannity ever done anything “as a journalist?” https://t.co/jkkawuJESX

In 2010, Fox News basically punished Hannity for planning to appear at a political rally. How they respond to his antics tonight will prove whether he owns them now. pic.twitter.com/XvVLSO5C3f

So if you campaign with Trump – like Hannity did tonight – and then have Trump on your show, is that an in-kind contribution?

Sean Hannity claims that others are “fake news.” pic.twitter.com/0JekHaDzz4

At least three of the people Hannity just called out also work at Fox News. https://t.co/g88iMyMK0l

Any talk about trump’s enduring popularity with a good chunk of the American public really needs to begin with the fact that the largest cable news apparatus in the country is quite literally a campaign arm for him.

CNN knocking Hannity for doing his show from AND going up to the podium at Trump’s rally last night. They’re right. Pretty unseemly to see a whole news program (even if it’s opinion) airing at a rally, which the host openly supports.