Twitter Flips Out Over Bonkers Scaramucci Comments: ‘One of the Most WTF Documents I’ve Ever Read’ 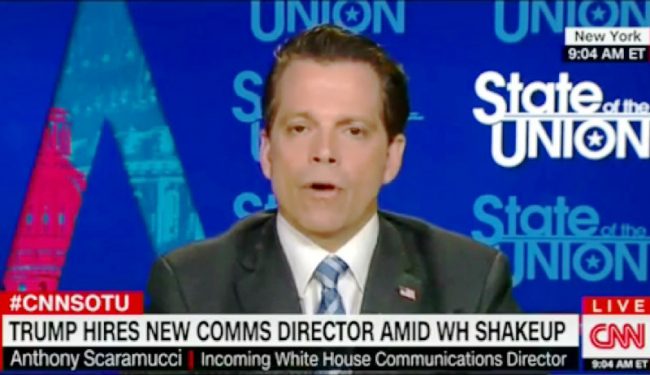 Have you seen Anthony Scaramucci‘s absolutely bonkers New Yorker interview? Please say you have. If not, well, you need to read the whole thing right this instant.

Crazy, right? We told you.

Twitter, naturally, has just completely flipped out over this stunning interview. Here is a sampling of the social media reaction:

This interview with Scaramucci is one of the most wtf documents I’ve ever read: https://t.co/N7LRAoGT3d

Say what you will about Sean. He was experienced enough to say ‘off the record’ https://t.co/kmW2Sqlyks

Today is the day that Scaramucci truly became communications director.

scaramucci should do the next boy scouts address

So proud to have the sentence “I’m not Steve Bannon, I’m not trying to suck my own cock” on @newyorker dot com today https://t.co/YMPgIfXdfM

Picturing Steve Bannon trying to suck his own cock is the cure for male homosexuality that Mike Pence has been desperately searching for.

“This guy’s fucking out of his mind,” former Cruz communications chief Rick Tyler says of Scaramucci.

And again, to be clear, THE MAN TASKED W WHITE HOUSE PRESS JUST TOLD A REPORTER: “I’m not Steve Bannon, I’m not trying to suck my own cock.” https://t.co/9STON7JORT

Congratulations, America. “Can Steve Bannon actually suck his own cock?” is now a reasonable question for White House reporters to ask.

Related: Steve Bannon is reported to have been alone in his office with the door closed for well over an hour now.

Basically, Mini-Me is hurling grenades all over the White House, apparently acting on the boss's frustrations. https://t.co/6Rg42G0qkB

Yes, the legislative branch is trying to destroy healthcare, but the executive branch is forcing us to imagine Steve Bannon's dong.

Oh my. I just read this. And I thought it was impossible for today to get more Lord of the Flies. https://t.co/R28AXsdcoT

Mooch should just end every press briefing and interview from here on out with, "The Aristocrats!"