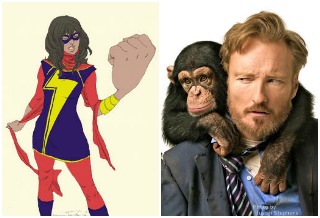 Conan O’Brien uses his influential Twitter account almost exclusively to share jokes on the latest news with his more than 9 million followers that may or may not end up in his late night monologue. Inevitably, some of these jokes rub his followers (and the rest of Twitter) the wrong way.

Friday evening, O’Brien posted a joke about Marvel’s new Muslim female superhero that has caused a major backlash and brought out accusations of racism against the comedian.

The tweet received a barrage of angry responses from people who not only pointed out to O’Brien that his comment was prejudiced towards Muslims but also that the character being introduced by Marvel is a teenage girl from Jersey City, not a housewife from Saudi Arabia. In other words, there’s more than one type of Muslim woman.

A sampling of the backlash is below:

After ABC and Jimmy Kimmel were forced to apologize for a young boy who suggested “killing all the people in China” during an on-air segment about the debt crisis, it would not be surprising if TBS and O’Brien end up retracting this joke and issuing an apology, even though it didn’t even appear on the Conan show. ]

But just as Kimmel wasn’t the one who wanted to kill everyone in China, you have to wonder whether it was actually Conan O’Brien who wrote and posted this joke on Twitter. As some have suggested, perhaps there was an over-eager intern running the account.

But even if O’Brien didn’t personally come up with this off-base joke, you have to think he approves messages that get sent out to 9 million of his closest friends.