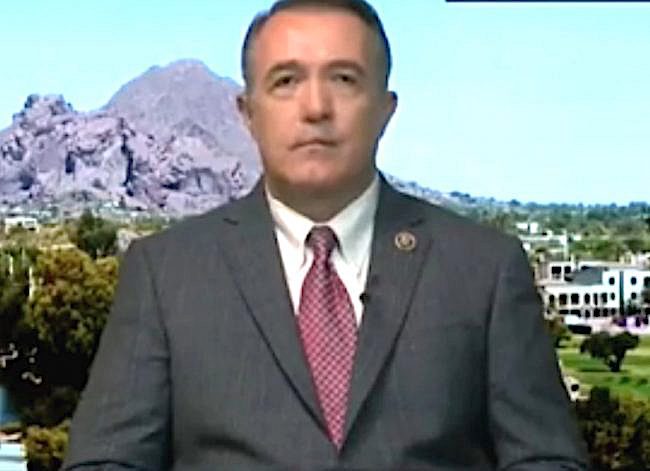 Earlier today, news broke that Rep. Trent Franks (R-AZ) is resigning from Congress at the end of January. After it was reported that this was coming in the wake of rumors of inappropriate behavior, it was revealed that Franks was being investigated by the House Ethics Committee over “credible claims of misconduct,” as described by Speaker of the House Paul Ryan.

Franks released his own statement claiming that he was being investigated because he approached two female staffers about the possibility of serving as a surrogate to his child. While he acknowledged that the discussion made the women uncomfortable and that he deeply regretted it, he also stated that it was the inability for his wife to conceive that led him down the path of speaking insensitively on the matter with others.

The Republican lawmaker concluded that he would be “unable to complete a fair House Ethics investigation before distorted and sensationalized versions of this story would put me, my family, my staff, and my noble colleagues in the House of Representatives through hyperbolized public excoriation.” Therefore, the way he put it, his only choice was to resign.

As one would imagine, the internet had lots to say over this pretty sensational story. And quite a bit of it had to do with the Congressman’s statement on the whole affair.

So Trent Franks, one of the most socially conservative members of Congress, went down for trying to make The Handmaid’s Tale real.

Is there dust in our reality simulator or

My favorite part of the Franks statement, without a doubt, is when he blames his kids for the whole incident because they kept bugging him about wanting a sibling

You know who could have told Trent Franks it was a bad idea to ask his female aides to have his babies? pic.twitter.com/tk1P8BtoYA

It's not that I don't think what Trent Franks did is wrong or unworthy of resignation; it's just that WE HAVE A SENATE CANDIDATE IN ALABAMA WHO MOLESTED TEENAGERS AND HE'S GONNA WIN.

BREAKING: Arizona Rep. Trent Franks' resignation for asking women who work for him to serve as surrogate mothers leaves men confused about when it's OK to ask female colleagues to be vessels for their man-seed

We also saw a variety of other takes:

Paul Ryan told Trent Franks to resign from congress, and called for Ray Moore to do the same, but he hasn't said a word about Donald Trump's abuse. Please explain that Mr. Speaker.

Guys, this is a just a theory but I think we need to keep an eye on Lois Frankel, Frank Pallone and Frank Lucas

So it appears Trent Franks is going to resign before Bob Mueller (Franks has been calling for Mueller to resign) https://t.co/1xr2Nw606j