Why on Earth is Twitter Shielding Louis Farrakhan?
Opinion 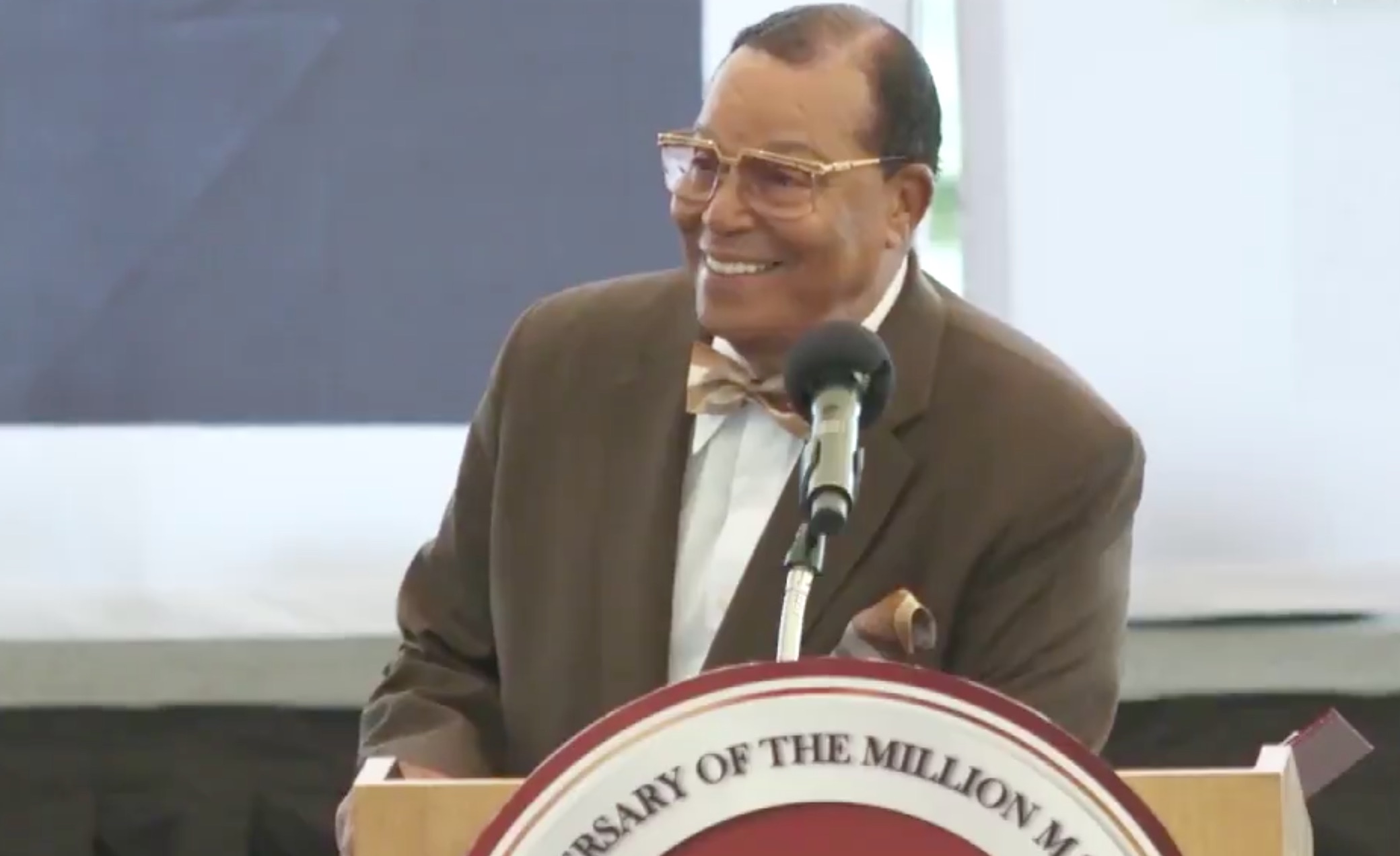 Louis Farrakhan is the most outspoken anti-Semite in America and his hate knows no bounds. He’s a homophobe, racist, misogynist, and a vile human being. He’s called white people “potential humans,” Adolf Hitler a “very great man,” and literally blamed Jews for 9/11.

Yet in a society growing more sensitive to marginalized minority groups and in an era where social media has given a platform to every American, he has defied gravity.

Just look at this excerpt from a sermon he gave he uploaded on Twitter.

In the clip, he thanked Jews who don’t like him for “putting [his] name all over the planet.”

“I’m not mad at you… because you’re so stupid,” Farrakhan told the Jewish community. “So when they talk about Farrakhan, call me a hater… call me an anti-Semite- stop it! I’m anti-Termite.”

People can agree that the video content and the text of Farrakhan’s tweet, which reads ‘I’m not an anti-Semite. I’m anti-Termite,” was blatantly anti-Semitic, right?

You may not promote violence against or directly attack or threaten other people on the basis of race, ethnicity, national origin, sexual orientation, gender, gender identity, religious affiliation, age, disability, or serious disease. We also do not allow accounts whose primary purpose is inciting harm towards others on the basis of these categories.

Perhaps when Twitter says you cannot “directly attack or threaten other people” based on their religious affiliation, they meant in a more literal sense. In this tweet, Farrakhan called Jews “stupid” and compared them to termites. Is that not a “direct attack?” Apparently not.

But just last month, Twitter announced a new “dehumanization policy” that will be enforced later this year.

You may not dehumanize anyone based on membership in an identifiable group, as this speech can lead to offline harm.

An example they provided as to what would violate their “dehumanization policy” was this:

“We don’t want more [Religious group] in this country. Enough is enough with these MAGGOTS!”

Well, that must mean that Farrakhan violated the dehumanization policy. He literally referred to Jews as termites! This obviously will get him banned from Twitter, right?

If you reported Farrakhan’s tweet, you may have gotten this response: 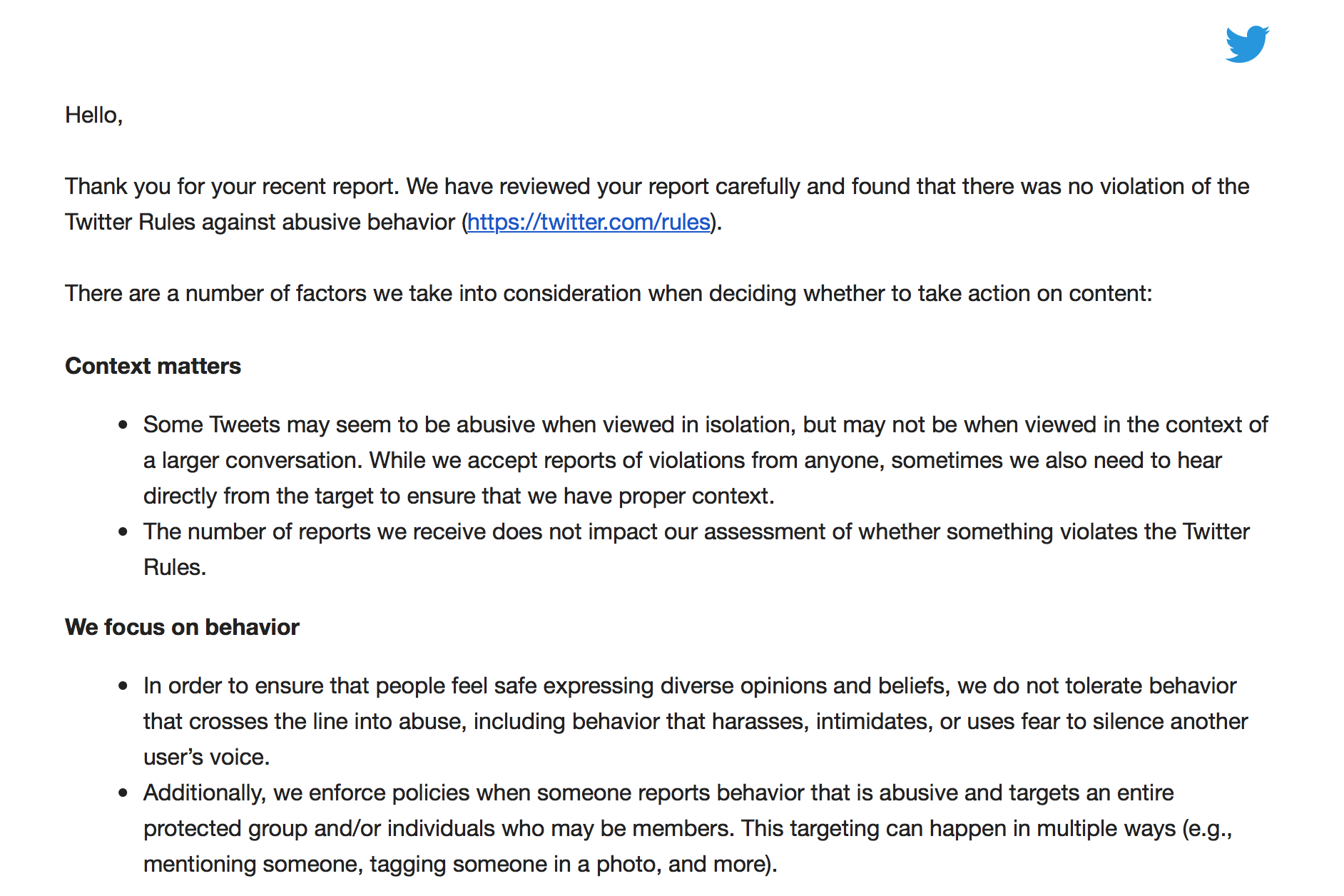 Twitter is suggesting here that the Nation of Islam founder may have been taken out of context and that the post “may seem” abusive on its own. Did they not watch the clip? Farrakhan provided the context! And how can they possibly say that they “enforce policies when someone reports behavior that is abusive and targets an entire protected group” when they’re giving a repeat offender like Farrakhan a pass?

Well, because the “dehumanization policy” hasn’t been implemented yet, Farrakhan gets a pass.

Just in from a @Twitter spokesperson: Louis Farrakhan’s tweet comparing Jews to termites is not in violation of the company’s policies. The policy on dehumanizing language has not yet been implemented.

So if you want to compare Jews to rats/insects – get it in while you can!

So that’s the excuse they’re going with. “We have a rule, but it’s just not official yet.” Fine, but once when it’s implemented whether it’s November 1, January 1, or tomorrow, we’d have to expect that Farrakhan would face some sort of punishment assuming his tweet will still be on his page.

What’s most jarring is the growing list of people Twitter has cracked down on. James Woods, Candace Owens, and David Duke all faced various suspensions for alleged violations, while Roger Stone, Alex Jones, and popular Twitter conservative, “Gay Patriot” Bruce Carroll were all permanently banned. It’s hard to imagine that the hate speech violations from others mount to the degree of Farrakhan, yet all of them suffered the consequences. Meanwhile, Chelsea Handler has lobbed numerous homophobic tweets at Sen. Lindsey Graham (R-SC), and Twitter didn’t lift a finger. God forbid a liberal be held responsible for something a conservative would have been destroyed for. But they do have time to suspend over 1,500 rightwing accounts for using a trending “non-playable character” meme to troll liberals by depicting them as “brainless drones.”

Twitter is a private company that can do whatever it wants. Jack Dorsey can do whatever he wants. If they wanted to ban Farrakhan for his dozens of hateful tweets, they would. And the fact that they haven’t speaks volumes, which begs the question: why on earth is Twitter shielding Farrakhan?

The irony of it all is that Farrakhan shouldn’t be banned. Nor should Chelsea Handler, Alex Jones, Roger Stone, or anyone for that matter who has been banished on social media. The solution to hate speech is more speech, not less. Because Twitter and other tech giants have been selective as to who gets punished and who doesn’t, however, it would only be fair if the rules applied to Farrakhan.

Twitter should either enforce their own rules or not have any at all. Because the egregious double standards they’ve set for Farrakhan are overwhelming.