Twitter Not Blocked In White House, As It Turns Out 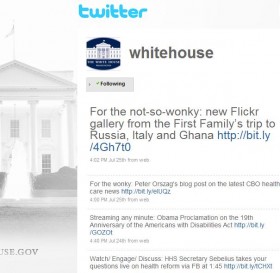 Yesterday we wondered about Robert Gibbs‘ statement that Twitter was blocked on White House computers: If it was, then how did the White House Twitter feed get updated? We did some web-sleuthing and discovered that not only were Tweets off the official White House Twitter feed posted during business hours, they were almost exclusively posted posted “from web” – i.e. during business hours accessed from a computer – or “from HootSuite” – a web-based Twitter app that manages multiple Twitter accounts with multiple editors, also from a computer. This was a mystery!

Well, mystery solved — thanks to White House Deputy Press Secretary Bill Burton, who very kindly responded to our barrage of questions on this important matter of national security yesterday.  In so doing, he laid to rest some of the extrapolated conclusions drawn from the 22-second clip of Gibbs on C-SPAN, notably that White House staffers were banned from Twitter (they’re not), that the same people are responsible for both @WhiteHouse and @BarackObama (they’re not) and that nobody tweets from the White House (they do!). It’s true, children: It’s coming from inside the house. Behold Bill Burton’s answers below:

Who updates the White House Twitter feed? Is it one person or a few people? (updating from HootSuite suggests multiple editors)

Where are the offices of that person/those people located?

New media [NB: Those offices are in the Eisenhower Executive Office Building.]

Are people allowed to bring their own laptops into the White House and work off those? Would that allow them to get on Twitter.com from inside the White House?

We use official government computers and archive records.

A little bit of recordkeeping a little bit of security but we are working with WH counsel and the Office of Administration CIO [Chief Information Officer] to review and relax these restrictions.

Not to my knowledge.

If not, could you point me to a few?

I have an account that I follow on my personal blackberry but I don’t actually twitter myself. It’s more to keep track of what Diddy and Perez Hilton are up to all day.

Would it be fair to call Robert Gibbs “internet-savvy?” Or would it be hideously inaccurate?

I’ve never known him to exactly break new ground as it relates to technology – but he’s a real whiz on his blackberry.

So there you have it. It should be noted that, a month and a half before Gibbs’ off-the-cuff response on C-SPAN sent the blogosphere into a min-tizzy,  Mother Jones‘ David Corn quietly determined that the new media team had exclusive White House Twitter privileges, and a month before that, Time‘s Michael Scherer described the travails of bringing the White House into the world of social media, including the new media team’s exemption from the standard White House computer blockage (Scherer’s also the one who noted that, technically, the new media team is in the Eisenhower Executive Office Building, but “It’s coming from inside the Eisenhhower Executive Office Building!” is so much less scary. Then again, Cheney used to spend a lot of time there). Even so, the one or two tweets from Tweetie demonstrate that one could update Twitter from the White House; the point is, Twitter isn’t verboten, which means the geekosphere can relax and know that all their @replies to the White House are totally being read.