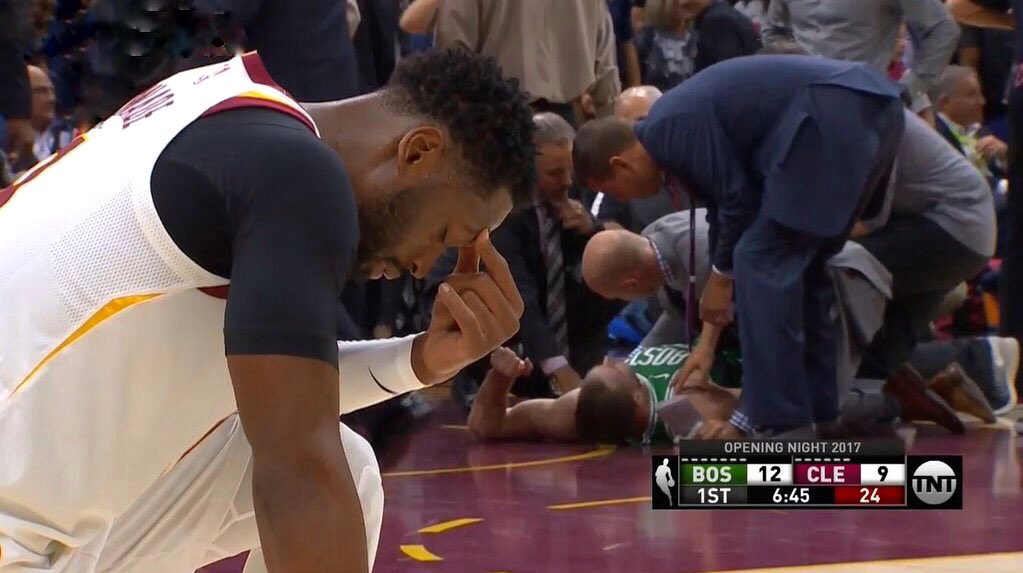 During his first game sporting the green and white colors of the Boston Celtics, NBA guard Gordon Hayward suffered an extremely disturbing leg injury while playing against the Cleveland Cavaliers.

Less than half-way through the first quarter, Hayward took a nasty fall while attempting to finish an alley-oop. An unnatural landing resulted in his left-leg bending and seemingly breaking. Players from both teams immediately reacted with horrified expressions and disturbed body language.

Hayward was then carted off court to a thunderous applause and sent to the locker room — where Cavs’ star LeBron James reportedly met him. According to ESPN, Hayward has suffered a fractured ankle.

As with many gruesome injuries, Twitter reacted with showers of “thoughts and prayers,” as well as with just pure shock.

Praying for my guy @gordonhayward!!! NEVER want to see any of the guys go through anything like that.

Prayers up for you @gordonhayward

God bless you bro @gordonhayward ! ?? help him thru this god!

Our thoughts and prayers go out to Gordon Hayward. #BiggerThanBasketball

The 3 most gruesome basketball injuries I’ve ever seen on TV.

quite possbly the take of the year. king’s stay king’s https://t.co/CxvSzCgOhK

Celtics gather after Gordon Hayward is carried off pic.twitter.com/A7UjjM03ob

All the best to Boston’s Gordon Hayward. Heartbreaking to see such a great player injured that way. Speedy recovery. @gordonhayward pic.twitter.com/leBDQBgLqv