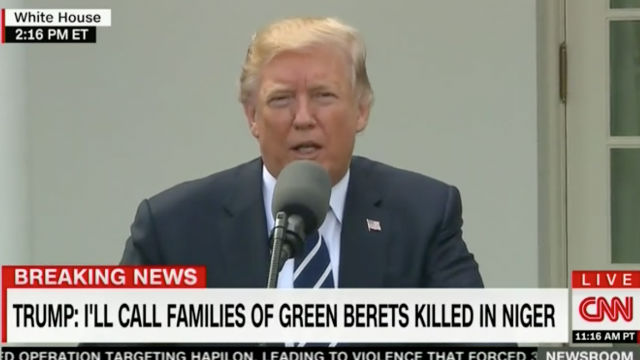 During his press conference today, President Donald Trump took a shot at his predecessor by claiming that Barack Obama and other past presidents didn’t make calls to families of fallen soldiers.

Trump was subsequently called out on this and hedged, saying, “I don’t know if he did. I was told that he didn’t often, and a lot of presidents don’t. They write letters.”

People who served in the Obama White House were particularly appalled:

Trump is a deeply disturbed ignoramus who is a pathological liar, but Mitch McConnell is cool with it cuz tax cuts or something https://t.co/8GwjnD3t9b

Now he’s lying about his own lie https://t.co/P79tUbezq3

that’s a fucking lie. to say president obama (or past presidents) didn’t call the family members of soldiers KIA – he’s a deranged animal.

And a lot of other people on Twitter were shocked too:

.@POTUS said Obama did not call families of killed soldiers. But Obama did call them.

Unbelievable. Republicans, this is your leader. https://t.co/bPOswPhP59

This is ugly & easily falsifiable thing for Trump to claim. https://t.co/qOkIhtsJph

In a really ghastly lie, Trump says that Obama, unlike him, didn’t call the families of dead soldiers.

What a gross, slanderous thing for Trump to say that other presidents didn’t call the families of dead soldiers.

Imagine the right’s reax if it took Obama nearly 2 weeks to call the families of fallen soldiers. https://t.co/nfnDCYsUJ9

This is absolutely false. https://t.co/hnxKoUjvF6

. @realDonaldTrump says “most” of his predecessors, Obama included, didn’t make calls to families of slain service members WHICH IS UNTRUE.

“Pres.Obama I think probably did sometimes, and maybe he didn’t, I don’t know, that’s what I was told,” @realDonaldTrump. #ohboy

The one consistently predictable thing about Trump is he can always find a way to be worse https://t.co/qGvw84ql5T

A fact that’s too good to verify https://t.co/5uAMMcrjC7