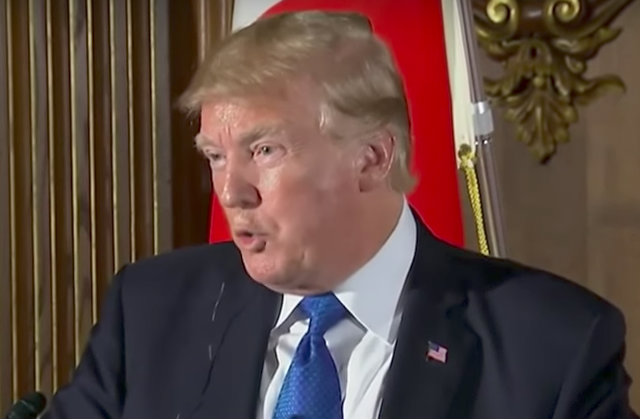 President Donald Trump’s Twitter habits have reached such extreme levels that they hardly have the shock value they once had, but his retweets this morning surprised and bewildered some of his most ardent supporters.

The president shared three videos posted by an anti-Muslim activist and leading official of the right-wing UK political party Britain First. The clips were titled “Muslim migrant beats up Dutch boy on crutches,” “Muslim Destroys a Statue of Virgin Mary,” and “Islamist mob pushes teenage boy off roof and beats him to death.”

Britain First and the original poster Jayda Fransen are known for attempting to use anti-Muslim content to rile up outrage against immigrants. In response to Trump’s support, Fransen tweeted, “GOD BLESS YOU TRUMP! GOD BLESS YOU AMERICA!”

Twitter reacted to the president’s disturbing retweets with an array of anger and shock, as can be seen below.

Bredan Cox, the husband of U.K. Member of Parliament Jo Cox, who was murdered in 2016 by a Britain First supporter, tweeted that Trump “should be ashamed of himself”:

Trump has legitimised the far right in his own country, now he’s trying to do it in ours. Spreading hatred has consequences & the President should be ashamed of himself.

This man’s wife, a young British MP, was murdered at the hands of Britain First, a fascist, racist hate group Trump promoted this morning. https://t.co/zVgR2WfdCO

President Trump is inciting hatred of a religious minority from the Bully Pulpit. If you’re in a position of prominence in the Republican Party––or in his government––you have an obligation to speak out against this.

It’s going to be a great day as US journalists find out about Britain First.
Quick primer: Stunt-loving anti-Muslim far-right social media troll group increasingly ignored even in the UK. At least until the US President started retweeting them. https://t.co/MmmiI7MKfE

Britain First is a racist, fascist organization that the President of the United States spent the morning legitimizing. https://t.co/00Vdn7y60W

Jayda Fransen, deputy leader of Britain First, was convicted of religiously aggravated harassment in November 2016 after abusing a woman wearing a hijab. https://t.co/rrIlLukLg7

So it’s not lost in the sauce here: Trump is promoting hatred of Muslims. That’s what those retweets were about. That is the content and the purpose of the tweets. https://t.co/DCHLxaePX0

President Trump retweets the deputy leader of an ultra-nationalist and fascist (redundant) British political part. This should increase the value you place on major Left wing criticisms of the American Right.

Trump just retweeted three anti-Muslim videos from a British woman who is a leader of an extremist group in the U.K. and was arrested for harassing a Muslim woman for wearing a hijab https://t.co/y8fDbyM0Jg

2/ Tweeting out anti-Muslim propaganda videos is also harmful to 26,000 US troops in harm’s way in Iraq, Syria and Afghanistan, as well as others stationed in Muslim-majority countries. Their lives depend on trust of Muslim allies.

I hope our Government will condemn far-right retweets by Donald Trump. They are abhorrent, dangerous and a threat to our society.

Good morning, Mr President @realDonaldTrump – what the hell are you doing retweeting a bunch of unverified videos by Britain First, a bunch of disgustingly racist far-right extremists?
Please STOP this madness & undo your retweets.

However, one of Trump’s biggest fans was not shocked by the videos. In fact, former KKK Grand Wizard David Duke loved them:

Trump retweets video of crippled white kid in Europe being beaten by migrants, and white people being thrown off a roof and then beaten to death, He’s condemned for showing us what the fake news media WON’T. Thank God for Trump! That’s why we love him!