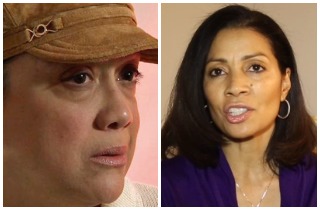 Hill told KDKA that she met Cosby when she was a 15-year-old aspiring actress. She worked on his educational TV segment “Picture Pages” and they ended up having a four-year relationship. She says Cosby flew her around to different cities and they would spend nights together.

On each of these nights, Hill claims, Cosby would offer her a drink despite her being underage. Sometimes she refused, but he would insist upon it every time. Hill believes she was drugged, and after something Cosby said to her once the next morning, she believes it’s possible she was raped (though she doesn’t know for certain).

Leslie, on the other hand, remembers very vividly what she described happened to her. She claims that she met Cosby in a Las Vegas hotel once for, she thought, a meeting to discuss her acting career. Leslie says Cosby had her pretend to act drunk and go wet her hair in the bathroom.

She believes that since she didn’t do what he wanted, Cosby intentionally ruined her career.

You can watch both women speaking out below, via KDKA and NYDN: