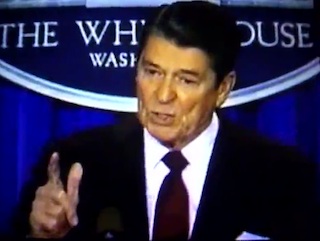 The Year of No Culpability continues! A couple months ago, I wrote a column about the not-new but definitely growing phenomenon of political parties (as well as particularly politically biased news outlets) seeking to fight every wrong with another wrong. It’s become ubiquitous in this election year (“Did Rush Limbaugh say something offensive? Well, don’t apologize. Go through transcripts of unrelated Bill Maher quotes instead!”) so it should come as no surprise that the technique is being trotted out again in the wake of the Neil Munro press conference fiasco.

Considering even Fox News bigwigs were wagging their fingers at Munro the past few days, you’d think the story would be over. However, many sites (including Munro’s own Daily Caller) are still holding the guy aloft as some kind of Edward R. Murrow-esque (but not him because that guy was totes a Communist!) hero of journalism. So, with the same gusto that people went searching for a dead white boy to go up against Trayvon Martin in a Tragic Corpse-Off, folks have been scouring the earth for proof that Republican presidents can get interrupted too.

And kudos to the American Spectator, they have struck gold!

“You didn’t seriously buy into all this horse hockey about the Daily Caller’s Neil Munro having violated some sacred rule about interrupting or, as the press would call it, ‘heckling’ the President? Of course you didn’t. But what may come as news to some is that for the White House press corps, interrupting and heckling the President is A-OK… provided, of course, it’s not President Obama.”

Sure, I could point out the fact that President Reagan was clearly in the process of ceding the podium to someone else when he was interrupted and not in the middle of his speech but whatever. That would just be viewed as partisan hair-splitting. So lets give the Spectator (and the Daily Caller who reposted it) their due credit.

Congrats. You have proof that a Republican president also had reporters interrupt him once. Therefore it’s ok always and no one ever has to learn anything or change.

Dear reader, if anyone asks you what the main lesson of the 2012 campaign season has been, I think it’s fairly obvious; If you can prove that everyone’s an asshole, then no one ever has to get better.