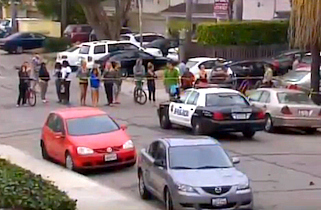 The UCSB campus weekly The Bottom Line didn’t publish an article about Elliot Rodger’s Friday night rampage until Monday, a decision they explained in a weekend op-ed was meant to “minimize the emotional harm” to the paper’s staff and the community.

“Whenever tragedy strikes, emergency responders and journalists are some of the first on scene and are, consequently, more likely to suffer from emotional trauma because of it,” Executive Content Editor Emeritus Hannah Davey wrote Sunday, noting that the Society of Professional Journalists Code of Ethics calls for journalists to minimize harm and “show compassion” for those who may be adversely affected by the news.

“After extensive discussions among our Editorial Staff, advisor and alumni, we have decided to not immediately publish an article on the recent tragedy in our community of Isla Vista to minimize the emotional harm for our reporters, photographers and multimedia journalists,” Davey continued. “Before we are journalists, we are Gauchos and feel we need our time to mourn, process and recover from this senseless violence.”

RELATED: Guess Which NYC Rag Was Willing to Publish Name and Face of Elliot Rodger’s Crush

“Gauchos are some of the toughest people in the world,” she concluded, pointing interested readers to the Twitter feed of one of the paper’s reporters, who filed the weekly’s post on the incident the next day. “Out of heartbreak, we will emerge stronger and more united as a community than ever before.”

By contrast Marissa Wenzke, an editor for UCSB daily paper the Daily Nexus, was nearby when Rodger opened fire and was on the scene immediately interviewing eye-witnesses. She published an article on the incident at 5:16 a.m. Saturday morning.