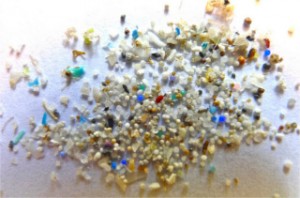 Manmade atolls of floating garbage are one thing, but the most dangerous pollutants in the world’s oceans may be what we cannot see.

According to a UN Environment Project report released this week, microplastics are a growing issue of global concern. Microplastics are defined as particles ranging in size from 1 nanometer to 5 millimeters, or “between the size of a virus and an ant.”

These small plastic pieces […] can be found worldwide: in the water of lakes and seas, in the sediments of rivers and deltas, and in the stomachs of various organisms ranging from zooplankton to whales. Microplastics have been detected in environments as remote as a Mongolian mountain lake and deep sea sediments deposited five kilometers below sea level. One study estimated that, on average, every square kilometer of the world’s oceans has 63,320 microplastic particles floating at the surface,

According to a Vox explainer published Monday, there are some 5 trillion pieces of plastic floating in the oceans, 92% of which are microplastics. Some microplastics are already minute pieces of detritus, like beads from facial scrub or synthetic fibers; others are larger pieces of plastics “mechanically broken down into smaller pieces by external forces such as UV radiation, wind, waves, or animals,” according to the UN report.

A principle concern involves what the report’s authors describe as the “plasticization of the food chain.” In one harrowing study, a quarter of the marine fish sampled from markets in Indonesia and California contained plastic or textile fibers in their guts.

“Besides seafood, emerging evidence shows that the microplastics, especially synthetic fibers, have been detected in a variety of foods, including drinking water, beer, honey, sugar, and table salt. The presence of microplastic in foodstuffs could potentially increase direct exposure of plastic-associated chemicals to humans and may present an attributable risk to human health,” the report says.

The chemical additives in these microplastics — often introduced to make them more durable — can leach into the food chain. At sufficiently high concentrations, the report warns, these additives can disruptive gene development, reproduction, and immune responses to toxins, in marine fish and potentially in humans.

You can view the complete report here.