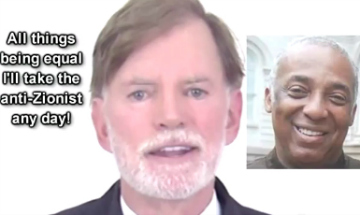 Former Black Panther Barron has a long history of controversial remarks, some of which have been interpreted as anti-Semitic. He once called Israel the “biggest terrorist in the world,” and likened the Gaza Strip to “a virtual death camp, the same kind of conditions the Nazis imposed on the Jews.” At one point, he praised the late Libyan dictator Muammar Qaddafi as a “freedom fighter.”

Barron is running against New York State Assemblyman Hakeem Jeffries in the Democratic primary for the open seat in Congress. Former KKK leader Duke praised Barron for his anti-Zionism and refusal to kowtow to the “Jewish-owned media.”

“In a race for Congress between an anti-Zionist black activist and a black activist who is a bought and paid for Zionist Uncle Tom, I’ll take the anti-Zionist any day,” Duke said in his video endorsement. The main reason for Duke’s endorsement, it seems, is a mutual hatred for the State of Israel and what Duke describes as a “Zionist-controlled media” in America:

I certainly agree with Barron that Israel is the worst rogue terrorist state on Earth. It’s not Iran, folks. Barron is certainly right about Zionist control over the media and our government, and the treason that’s existed in our Congress and he’s right about the fact that Zionist wars have caused the death or harming of hundreds of thousands of Americans and cost you trillions of your tax dollars. Barron’s opponent, on the other hand, is a complete Zionist sellout of both the black people and all the people of America.

Duke did concede that he and Barron have a lot to disagree on — namely issues involving race. I guess that will happen when you’re a “white nationalist” and the other person is a “black nationalist.” But Duke insists that “In this election of limited choices, I believe that Charles Barron is the best choice. Why? Because I think there’s no greater danger facing the United States of America and facing the world than the unbridled power of Zionist globalism. […] Charles Barron stands against that power. If I lived in New York City, I would certainly vote for Charles Barron.”

But Duke suggested that Barron could lessen the divide over racial issues: “Black leaders like Barron should work to lessen the enmity between blacks and whites and realize that the Jewish extremists in America keep whites and blacks from mutually solving our interests and differences. The Zio masters want constant conflict between the two groups so they can utilize a divide and conquer strategy over us all.”

Duke also directly criticized Barron’s opponent Jeffries, saying that along with President Barack Obama and presumptive GOP nominee Mitt Romney, Jeffries is in the tank for “the Zionist Club FED and the international banking establishment.”

To his credit, Barron told the New York Daily News that Duke’s video endorsement is “foolishness” and that he will not comment on the former KKK leader. Instead, he wishes to focus on discussing “regulating Wall Street” and “a more equitable distribution of wealth.”